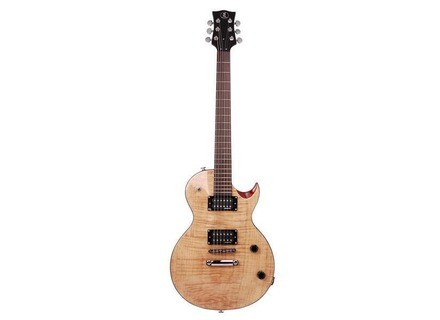 Even II, Other Shape Guitar from Elypse Guitars.

On the handle is a handle to paul, not what are thinner but it gets the job done, on the other hand is at the place where the handle is Colee gene it a bit for solos but it is not too disabling.
Level it is clear that weight is heavy, has about 4 or 5 pounds, after two hours on the back it is felt ^ ^
The criticism I could make is that the model I received the 12th and 13th frets have been badly depressed and it borders a bit = /
Tiennet mechanics well enough agreement we will not complain ^ ^

I use it mainly in a register and metal EMGs very involved in the sound quality, the cleans are not clean-break three-legged duck but it makes coffee for a walk or passage in clean nice break in example , distortion level where it sends micro support all types of distortion, the well drilling fat do not worry, and indeed what makes them versatile.
I use a Vox VT 20 + and soon with ENGL Gigmaster 30W combo.

I for 1 year and a half now and it did not move much, this is my first guitar that I have already changed the against another of the same model due to a lack of freight, we can also say that the production is not the forte of Elypse but given the features offered by the guitar as microphones or alloy mahogany / maple for that price you can not ask for more it outperforms the Cort Squier and another the same price.
The sound is great most of the guitar and making less.
With the experience I would do this choice without hesitation =)

See all 11 photos of Elypse Guitars Even II »

Other Elypse Guitars other Shape Guitars

Other names: even ii, evenii, even 2