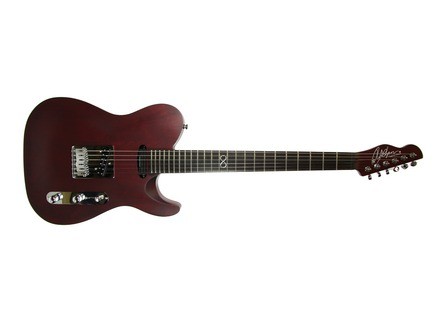 Djorll's review (This content has been automatically translated from French)" a thunderbolt!"

Made in South Korea, they have the advantage of having an excellent value for money because the seller (Anderton store in England) is both the importer and the distributor (less margins applied)

For £ 599 we have:
a body and a round chambered mahogany
a fender pitch of 25.5 "(647.7 mm)
a rosewood fingerboard
a neck-through with a slim profile C (not as much as in ibanez but thinner than in fender)
a radius of 13 ¾ "
24 Extra Jumbo frets
of Grover
1 x Seymour Duncan Hotrails (neck)
1 x Seymour Duncan Little '59 (bridge)
Gig Bag a very solid and a key for setting the jumpers

The finish is available in Satin Black or Satin Cherry

The controls consist of:
- A 3-position switch,
- A Master Volume,
- A Master Tone with push-pull splitter microphones

It was first a thunderbolt display because I always wanted to have a guitar tele shape with rounded table and head thrown back. It was necessary that so I may order for the first time a guitar online. I wanted to take it in black but as it was not available until January and I have not had the patience to wait, I bought the red version. Although I took because it is gorgeous in this color.

In fact since took it out of cardboard nothing has disappointed me in this guitar.

The beast weighs despite its weight room, mahogany forces. If I had to nitpick, I have well chamfered upper body to the right arm can rely more comfortable when sitting.

Then the handle is a delight with access to impressive treble thanks to passing round. I expect the 24th fret of the low rope without effort.

The profile is very comfortable, and I confess to having a taste for extra jumbo frets which greatly facilitate the bends.

All positions of the microphones are usable, seymour quality, no surprise.

Its mahogany side gives it a pretty dark color that I really like, I find the sound a bit of a SG with more definitions.

I use it mainly on a Laney TI15 (signature Tony Iommi), and I find it very comfortable in hard rock, metal and stoner.

In fact playing on the volume and adjusting amp can highlight its qualities as needed: its very defined, dark color with low trunk that really, very dynamic attack.

In splittant mics I find that I like a Tele, not at a very good American Tele, but it is frankly convincing (I would say to my face weapon equal Tele Ash light is not already bad! besides I sold blow ^ ^)

The middle position is very fender and calls the casserole.

The volume knobs and tone are both effective and progressive.

Since I do I loose, I also play a lot more, that's why I talk about Thunderbolt.

It is the perfect mix between my Gibson Les Paul gothic and my fender Tele Light Ash. So much so that I have sold without a shadow of remorse.

I'm really impressed with the level of finish of the instrument, especially considering its price.

After everyone's tastes but then I fell smack bang on what suits me and I hope one day fall on another guitar able to stick me such a slap.