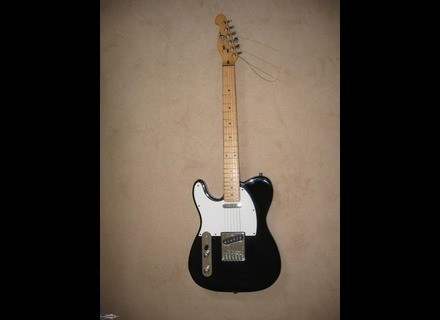 GervaisG's review (This content has been automatically translated from French)

Chevy Heavy Telecaster
5
Designed in Germany and manufactured in Korea.
Telecaster Guitar shape (as the name could suggest), mahogany body with a table in Saddle Flamm (it's less common for this type of guitar), handle Rabl (tapering towards the heel) with a touch of 22 boxes Rabl. The acastillage (dor is composed of a standard vibrato, a nut roll and 6 mcaniques oil bath online. Ct electronics, it sounds like a configuration plutt Music Man / Peavy Wolfgang. Two double-coil pickups, a 3-position slecteur
and a button for volume and that's it. It's pretty spartan, but it works as you will read below.

The weight of the lev enough can (but less than a Les Paul) can fatigue over time, but the price paid for a good sustain. The handle thick and round, with an "Diameter" constant from one end of the handle the other, is actually less tiring than a round end for a game according to many bars. For a quick game, I can not our answer because I can not play really fast. Telecaster type heel is - almost no work at all, makes Access in boxes of extreme highs more difficult than some modern guitar. For cons, the key SCALOP the game a little easier on these same boxes. The vibrato seems effective, but n'tant not a fan of it, I can gure say more about it.
Ct acastillage is simple but effective. This guitar is dsaccorde difficult.
Terms of use, I do not reproach him dernires Access in boxes made difficult by the heel not worked (although I did not go often tease these cells-l.

The name of this guitar is not usurped. Heavy is not just about weight. The output level of the microphones is trs lev, lev over a microphone type PAF or P90. In addition, the guitar sounds dj a more than average lev empty. The sound is full and soft vacuum in the lower mdium (influence of mahogany) and Lev and incisive in the treble (influence of the handle while SLAR). The sound is so dug in mdiums. This is reflected in the sound amplified by the microphones.
Although the output level microphones or lev they remain clean throughout the race potentiomtre volume, at least the neck pickup.
Although sr must reduce the gain of the amplifier so that it is true because, given the output level of the microphones, the amplifier will saturate cruncher or fast enough. The neck pickup provides a warm and round with highs alive music perfect for "soft" (jazz, pop). The bridge pickup will play music a little less sweet (blues, rock) and a bit aggressive (hard rock). The Heavy Tele will be less comfortable for the Metal saturation because it dlivre are warm with a grain ssez "pais".
The three positions (neck, bridge and intermdiaire) are diffrent trs, to obtain a good range of sounds. Finally, the only potentiomtre s'avre extremely efficient, much more than other guitars I've had in the hands (configurations 1 volume + 1 tone and 2 volumes + 2 tones ). The entire race potentiomtre be used (same 25% signal level is sufficient and well suprieur to background noise). In addition to rglage output level, this module potentiomtre sound, a button diffrent Tone Fawn but just as effective.

I use this guitar for 2 years. I like the look of this guitar. Its sounds can play jazz, blues and rock and even hard rock, which suits me because I do not like all that is Metal & Co. sr Although it is not perfect: the 'Access in dernires boxes is amliorable, microphones could be better still (I have Benedetti on another guitar that is suprieurs thereof), the table does not seem Saddle be massive. But for a while, the note will be dirtier. The report qualit-performance/prix this guitar is good trs.
Did you find this review helpful?yesno
»