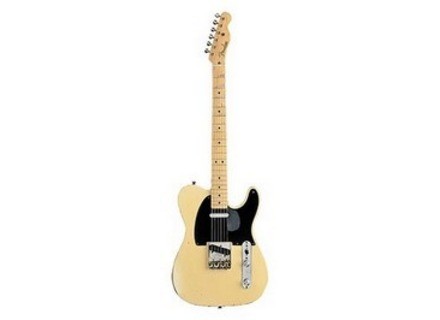 Fender Custom Shop Time Machine '51 Relic Nocaster
4
The '51 Nocaster is the original Telecaster that Leo Fender created. This model is a reissue of that very same guitar made way back when. It features an ash body, maple neck, 21 frets, a standard 3 saddle Tele bridge, 7.25'' radius, Tele-style pickup configuration with a 3 way switch, volume knob and tone knob.

I keep going back and forth with this model. On the one hand, it's fairly faithful to what I'd imagine the original Nocaster to be. However, compared to today's guitars, it has a few flaws. For one, the radius is absolutely horrible. It makes bending a huge pain when you start to have medium to lower action. The saddles have a huge intonation flaw, and the strings can get caught in the little saddle height adjustment bolts. This can create some nasty reverberations that echo throughout the guitar. The neck is big on this thing, and that might not be for everyone. That said, the fretwork on this is killer, and it's put together very nicely. I'm not usually a huge fan of relic'd guitars, but this one wasn't too bad. It seemed very natural to me.

The guitar sounds incredible. The pickups seem to have that perfect tele sound that I always picture in my head. The bridge is very spanky with a great twang. The neck sounds very vowely, and when they combine, it has a very cool sound going on. All the positions are very useful. Ash leads the guitar to have a strong top and bottom end with the midrange a bit scooped sounding. This allows it to sound very huge, and clean tones are out of this world. Mid gain tones just ooze with mojo, too.

I have a hard time recommending this guitar considering how expensive it is. On the one hand, it's a great guitar that sounds wonderful. On the other hand, it has a lot of flaws that I just wouldn't be able to live with after being spoiled by today's guitars. You should really try one out before you buy, but if you do decide to buy blind, you have a much better chance of getting a good guitar than the regular MIM or MIA Fender line.
Did you find this review helpful?yesno
»

Fender Custom Shop Time Machine '51 Relic Nocaster
5
(Originally written by mrskwad/translated from Audiofanzine FR)
Telecaster model (Nocaster was the first name of the Tele). The original name was Broadcaster but Gretsch already used the same name for a drum kit series in the 50's so Fender had to stop using it. Due to this the guitar had no name from the end of 1950 to the beginning of 1951 and the headstock was only labeled Fender... Afterwards Fender started calling it Telecaster. Collectors started to call the no-name Telecasters "Nocasters" much later.

In 1999, Fender produced a limited series labeled Nocaster with all the features of the original guitar.

Mine has a relic finish: the fingerboard and body look worn out and are covered with a slim varnish, while the finish of the neck makes it easy for the hand to slide. The body shows wearing marks and scratches under the forearm. I give 18/20 points to this relic finish because it looks extremely authentic.

People who see it really think it's an old guitar.

It's an old new guitar.

The neck is so thick that it doesn't have a heel!!!

It can be surprising and it most surely won't be to everyone's taste but I quickly understood that it gives a huge dynamic response to the sound. Vibrations easily reach the very light one-piece body made out of selected wood. So it's not just a wood plank with pickups. I also own a vintage '52 Reissue bought it 1993, I also tested the '52 Hotrod and some modern Telecaster models. However it's impossible to compare this Custom Shop Telecaster with mass produced models. When you think you could get this guitar for a much lower price in the 50's and 60's...

Very good pickups but they are not the most important thing of a guitar. At least in my opinion

Its natural resonance is simply unthinkable in a mass produced instrument,

This guitar sounds amazing plugged into a Twin or a good Fender amp. It's mind blowing !

I don't understand why jazzmen always play hollowbody Gibsons, which I admit do sound wonderful but are a clichÃ©.

Regarding versatility I'd say this guitar is conceived only for a certain music style. Rock, blues and jazz sound perfect but it's always matter of taste. I can also imagine playing other music styles with it but also depends on the pickups!

I've owned it since March 2008. I love its resonance, neck and its honey blond finish. Sometimes the relic finish feels a bit awkward because I know there are no stories nor live performances, studios, parties, etc. to back it up. It's only a finish. However the instrument does have a soul and I'm sure it will deepen as time goes by and I play it more and more. I'll have to play it until there is no varnish on it, like Rory Gallager's Strat!!! lol

If you want this guitar to become yours you'll have to put your life into it, otherwise it will only be a collector's item.
Did you find this review helpful?yesno
»

bruno.s's review (This content has been automatically translated from French)" Super Sonic!"

Fender Custom Shop Time Machine '51 Relic Nocaster
5
It's a TV Nocaster 51 "relic" made by the custom shop in 2006. It is aged in the workshops.
Given the beast, you'd go back 60 years ago. The finish is simply bluffing. We like it or not. Personally, I would have preferred one that is not tonchée, but generally it goes (this is not a "heavy relic" of belt worn at once!)
The color "Honey Blonde" is magnificent. Translucency reveals the grain of the wood (alder swamps) contrasts with pulling on the white. Sublime!
A handle that I like. U-shaped, thick throughout, which is well within the catch-with a satin varnish that will not stick. Moreover, the vacuum of his guitar (hear no amp), a perfect balance, owes him much. You can feel the guitar vibrate in itself. It gives the feeling that I can not find my other electric guitars. (A 175 and a Gibson Firebird). The mechanical (also aged), adjust the fine tuning
Micro side, it can be easier ... and more efficient. A round-1 easel
The selector provides
Position 1: Neck pickup with a treble attenuation. Very jazz
Position 2: Neck pickup simply
Position 3: Bridge pickup. A knob (blender) is used to gradually mix two microphones.
The bridge / tailpiece is pretty rudimentary. 3 bridges with two screws each setting. Enough.

Whether you are sitting or standing, holding the scraper is nice. No imbalance, and light contributes greatly to the comfort of the game (the sound also!)
The notch below gives good access to acute, despite the thickness of the handle I remain amazed at the ease of play!.

As I said, no amp, it sounds!
But plugged into an old fender tube .... The slap ... Terrible ... Never heard a sound like that ...
You have to hear it to believe it ... How did I spend next 30 years?
Jazz, blues, to rock, picking ... it's great polyvalent.et same time is very typical.
With the neck pickup was a snapping sound, a round to rival any Gibson with powerful treble and not at all harsh or shrill. The micro acute? Listen to Danny Gatton, Funky mama ... There's nothing to add.
This is a guitar that tamed and wins. It's wild. Each note, each chord is returned cruement. There's no artifice. The slightest hitch does not forgive and you can hear.
Good! To the metal, go your way ... it's not made for the guitar. There is the choice for Ibanez.

Recently acquired. I tried it by chance on entering a store Zique, and I fell ... 3 hours after fitting. The gus became crazy!
Well, it's a guitar cherrot. I'm going to tighten their belts for a while and resell another skyscraper to compensate. But just for the mouth and the sound I regret it.
I tried another TV latest in the shop, which was not "custom", but there is no comparison. With this model, it goes into hyperspace! is super sonic

Try and use all emergency!