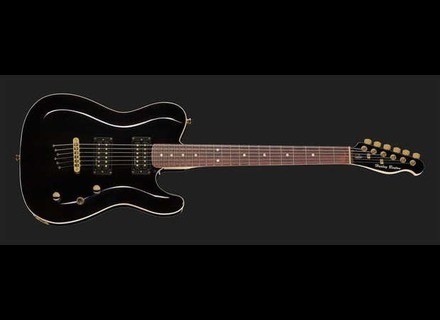 TE-40, TLC-Shaped Guitar from Harley Benton in the Deluxe series.

All user reviews for the Harley Benton TE-40

I use it on a Vox lil' night train with a v112nt,nothing exceptional effect-wise (megalith delta) and a noise gate (ns2), essentially for metal (thrash, djent, heavy, death...)

- What are your thoughts on the workmanship, electronics, and finish of this instrument? How is its intonation? Does its neck, touch, feel, shape, etc complement your playing style?

The wood and workmanship are a good surprise for such a price, the neck is very pleasant, soft, not rough, similar to that of a fender tele but I'd say it's flatter. Well-fretted, the highs are easily accessed, no problem except for the bridge that I had to change for a Gotoh shortly after buying because the original warped a bit. I haven't been curious enough so as to go and inspect the electronics' cavity but no problem with it so no need to! The top is BEAUTIFUL, it first seems a rather common chiny black but ibce well lit you realize it's more a very dark brown (which looks beautiful with the golden hardware) and the wood veins can be seen through the lacquer, just sublime.

It keeps in tune very well (I play in drop C with 11-52s), even after 3 hours playing it doesn'y need to be tuned again, sometimes it happens on the C string but it's a universal issue... When I play sitting (in the position of a classical guitar player) it doesn't slide, doesn't hurt your thighs (I've had an Explorer-shaped guitar which tip did), so everything's fine. When playing standing, it doesn't take a nosedive, in spite of the basswood body and ash top I don't find it heavy (so no aching back

- Do clean, crunchy and distorted sounds adapt well to different microphone positions? Are the guitar's different frequencies and sounds well-balanced?

That's the TE 40's weakest link, its pickups (although quite good) sound too bassy and lack trebles (to my taste), making distorted sounds lack precision, but this is something one can solve easily tweaking the knobs

In itself, it provides the instrument with a real sonic identity, so I won't change them, I'm fine with them!
Clean sound is hot and a bit fat, even on the bridge pickup, which is great for blues. It crunches easily, with the same sonic characteristics as in clean, and regarding distorted sounds (those I use most) I manage to get a large amount of distortions, it does the job, whether for sharp and shrilly sounds, overcompressed high gain, or clean dists... But the guitar's sonic identitu remains noticeable, I can get a large array of sounds with my pedal but whichever setting I use the guitar will remain recognizable! The neck pickup sounds much fatter than the bridge pickup (which already is - fat), which can be considered a pro or a con (to each his own)., to my taste it tends to limit the available sonic options.

- What are the pros and cons of this guitar?

Pros:
- wood & craftsmanship
- ergonomy
- it look
- ITS PRICE
- the pickups

Cons:
- the pickups (yes, I have sort of mixed feelings about them)

I decided to buy this guitar because I liked its look, and I wanted a HH tele-like, plus I only heard good thing about this brand so I thought "Why not? in the worst case I send it back if I don't like it"... And I didn't send it back.

To conclude, what we have here is a tele halfway between a Les Paul and "classic" Tele, it looks good, is comfortable to play, a sound... that provides mixed feelings

I'd do the same choice again if given the opportunity!
Did you find this review helpful?yesno
Cookies help us improve performance, enhance user experience and deliver our services. By using our services, you agree to our use of cookies. Find out more.