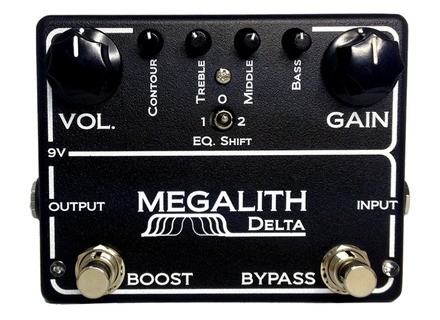 Mister_SdV's review (This content has been automatically translated from French)" The search is over!"

Mi Audio Megalith Delta
5
MI effects, division MI Audio pedals Australian amp manufacturer.
The Megalith Delta is supposed to reproduce the sound and the grain of the channel distortion of the amp 160 W (!) Megalith BETA.
The distortion pedal is facing big sound.
Not great, and simple in use.
Two large buttons: a volume and gain an equalizer three hypersensitive bands. Potentiometer outline, a 3-position switch and finally a boost.
The pedal is robust in its case, I have some questions when the longevity of small pots but hey it's my paranoid side!

The general configuration is very simple, I quickly forged a sound breathtaking. And if I use this term is because it is really what is past! O)
The pedal box is all that is rudimentary. MI Effects has instead invested in the pedal as well as packaging and took them!

Then, turn ...... This is the fastest slap my life! Really! It's been 20 years that I have this in his head without ever managing to hear through a pedal! I tested a lot but every time I left hungry, it was e & not bad but was still missing something. Either the grain was not either the equalizer was not precise enough, the pedal is not powerful enough to saturation, in short, an eternal dissatisfaction.
But between the grain and it reaches saturation, hyper accurate equalization added to the 3-position switch and knob outline, there is always a sound that hits!
I tested with three guitars: sometimes given as standard with a drop D here and there. I say this because beacoup video on youtube high gain pedals are in drop C or with seven strings, or it is well recognized that over the tone of his guitar sound seems more "big" is lowered, it is difficult to form an opinion.
So a Strat with single coils
Epiphone sheraton a 93 shown in SH4 (yes you can do metal with this guitar!)
a Fender Telecaster Custom FMT HH
pedal plugged into a Blackstar HT20 head and Orange PPC112 Cabinet (closed and equipped with a Celestion V30 cab). I said that the amp has great headroom and feasts on any pedal.
Anyway I spent 4 hours testing this beast in and fro across .. grain at 9am is already rock hard, 12H is already in the metal, at 3 o'clock and 5 o'clock it compresses more and when the boost is switched layer is added. Note that past 3am the boost does not add a little potato, but considering what you get in your head at this level of gain, boost ... why do? O)
Whatever the connected guitar, she is well respected and it always sounds. The videos on youtube (look for the haar where different guitars are tested) are not misleading.

I use it only for today, but I feel it is a party to a permanent part of my pedal board, the first impression is often the right one for me.
It is not yet distributed in France, but it is found by searching on sites or U.S. English.
But it really worth it to be tested. Note that I compared directly with the Wampler Triple Wreck .. Well it goes back to where she came, she did not go the distance with Megalith!
Now the quest for big sound is over for me!

Published on 06/23/12
MI Effects has announced the release of the Megalith Delta high gain distortion pedal.