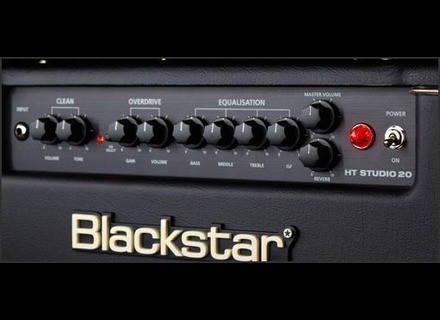 The amp is very versatile, from blues to aggressive rock.

It's very easy to dial in, in my opinion. You can get a good sound relatively fast

It's perfect for my style of music, hard rock, rock, rock 'n' roll. To play metal I use a pedal to have more distortion.

I've been using it for three years now, I tried some Vox and Marshall amps, but I like Blackstar because it's more of an underdog brand that deserves some serious attention.
Did you find this review helpful?yesno
»

The sound has lost a bit of its grit after one year of use. I just bought a les paul tribute epiphone and I was a bit disappointed with the result, compared to when I tested it in the store. After doing some research on the Internet, I decided to retube the amp. A local store gave me some info and I went for it. The bias setting is automatic, you only need to have matched tubes for the power stage. I used two 12ax7 groove tube gold series for the preamp and two JJ El 34 power tubes. And the sound is now amazing, I rediscovered my amp. Warm sound with a crystal clear pinch for the fender strat, the overdrive is better defined and with a nice crunch with a low gain. Don't hesitate modifying the amp when you want to give the amp a new life. The re-tubing cost me $80 for the groove tubes and $65 for the JJs. ... Not cheap, but I don't regret it at all!
Did you find this review helpful?yesno
»

Blackstar Amplification HT Studio 20H
5
All-tube amp
In terms of controls it has bass treble middle gain volume and what not for the overdrive channel, while the clean channel only has a tone and a volume control. The amp head also features a reverb.
20W all-tube amp
One 8ohms and two 16ohms outputs.

Dialing it in is more or less basic, the pots are really responsive, so you can start having a blast pretty quickly without breaking your head.
The manual is a bit "useless" because the amp head is easy to use, I know it for a fact because I "browsed" it...And I put that in quotation marks because It's so easy to use that it takes a whole page to explain how the footswitch or the pots work.
Is it easy to get a good sound out of it? I'd say yes, due to its simplicity, but if you want to get your own sound, you'll need to dig further into it.

In my opinion, it's good for all styles, certainly due to that famous function called ISF: A small pot that you turn right to get an American sound and left to get a British sound.
I find the sound is in itself fat enough, but it is so incredibly versatile and you can get such a vast array of sounds. You need some time to get to know all its functions, though.
I love the clean channel as much as the overdrive. With a good responsive neck pickup you'll get a sound worthy of the best current amps, with the overdrive you'll get an incredible sensation of power. The only two snags are that the amp lacks a bit of personality and the reverb, which you should use sparingly because it has a tendency to become nasty...

I got it very recently, almost two weeks ago.
I tested many amps before this one and, to be honest, this brand didn't really seem to win, but in the end I bought it due to its value for money.
What I like the most about this amp, besides its sounds, is the simplicity...It's truly plug-and-play, no bias adjusting or anything of the sort, the pots couldn't be easier to use and they are effective...
As I said before, its value for money is simply insane. It's surprising that IMHO an amp like this is more convincing than a jcm amp, and it doesn't even cost $1000.
With hindsight, I don't know if I would buy it again, I mean, I chose it because I wanted to change my solid-state sound and I love it...But if I were 40 and had some tours in sight, I think I'd get a Mesa....But until that day comes, I won't regret a thing!
LONG LIVE BLACKSTAR!!!
Did you find this review helpful?yesno
»

Blackstar Amplification HT Studio 20H
4
Wow this company keeps pumping out the goods. They are effectively design and marketed great quality and sounding amplifiers. Many touring and professional artists all over the globe are now turning towards Blackstar for their guitar amplifier needs. The have successfully taking a huge niche in the market over the last few years.

This amp sounds fantastic in both the clean channel and the gain channel. The most impressive thing is how natural it sounds and how well balanced the two channels are with the independent voicing gain structures.

The overdrive channel sounds fantastic in both humbucker pickup guitars and single coil pickup guitars. The tone is robust and smooth at the same time. It is an amp that just sounds amazing every note you strum or pluck on your guitar.

At new these amps come in at around $600 which is just a steal of a price if you ask me. They have such a quality of tone to them that is superb. I only hope other amp companies take notice at the sound of these amps.

If you need a good sounding amp that will not break your budget too much then this might be the amp for you. They have 2 amazing channels and each on their own is worth the price if this amp.
Did you find this review helpful?yesno
»
Read the 13 user reviews on the Blackstar Amplification HT Studio 20H »

Published on 01/12/10
Blackstar Amplification announced the launch of the HT Venue Series.