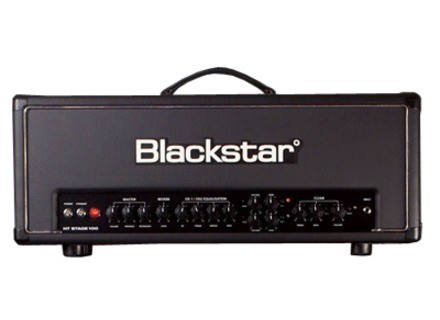 Blackstar Amplification HT Stage 100
4
This is a 100watt all tube amp. It has 3 channels, clean, OD1, and OD2. OD1 and OD2 both have vintage/modern switches as well as sharing Blackstar's proprietary ISF control.

The clean channel has a bass, treble, and volume controls. ODs 1 and 2 share treble, mids, and bass control as well as the ISF control. They have individual gains and volume.

The amp has a master reverb, resonance, presence, and volume.

The footswitch changes between the 3 channels and turns the reverb on and off.

Its really easy to get a great sound out of this amp. Never needed to use the manual.

This amp has a surprisingly excellent clean channel. The lack of a mid control doesn't limit the tone at all. Its nice and spanky.

The OD channels sound awesome. The modern mode tends to be bright and a little fizzy, it also has an absurd amount of gain, even on OD1. However the vintage mode is warmer, with less fizz, and less gain. Its pretty much the only mode I used it in.

The OD channels have a really aggressive sound. Sounds perfect for heavier styles, and OD1 can cop a convincing Marshall tone with the right settings. The aggressive sound is both a blessing and a curse as it wears on you after a while... the only way I can explain it is ear fatigue. However in a band mix this isn't a issue.

The shared eq and ISP on the OD channels really limit the sonic diversity. OD1 ends up sounding basically like OD2 with less gain.

The OD channel tone reminds me of an angry dual rectifier, its more aggressive with a tighter low end, but a similar low mid voicing. Its awesome. I much preferred my HT100 to my old Recto.

This amp is awesome, although sonically limited. With a few tweaks by Blackstar this amp could be epic.

However, at the price, I can't really complain. Its an awesome value. Great clean tone, killer aggressive high gain tone, and a sweet crunch. I highly recommend it.
Did you find this review helpful?yesno
»

Blackstar Amplification HT Stage 100
4
Blackstar amplification is one of the leading budget friendly amplifier companies in the industry today they have so many amplifiers to meet the demanding needs as so many guitarists out there if you need any type of amp I guarantee that Blackstar has it. I am starting to become a huge fan of these amps.

This amplifier has 3 foot searchable channels what that means if you have one coming waste channel which gets very sparkly and shiny. Next channel is the first overdrive channel. This channel gets a good classic rock tone great for sounding like AC DC or Led Zeppelin. Overdrive to headset another great overdrive channel. This channel is more of a modern friendly music channel. This will get you more of the new metal sound from some of the top leading metal bands today. You also have a presence and resonance knob to dial in the perfect mix and blend of highs and lows within the power section of this amplifier. You also get a master volume which is good for dialing in a bedroom volume. In addition you have a digital reverb that has a dark and bright switch with really works well with some of the cleaning tones that you can get some Channa one. In addition you had the speaker emulated output which gives you direct access to recording sessions and house PA mixture. It has a cool vintage styling front which looks a lot like some of the classic amplifiers from the old days. Like all BS amps you get the patent applied for infinite shape feature which allows you to dial in that perfect blend of American British style amplifier sound.

goldorock's review (This content has been automatically translated from French)" bof"

Blackstar Amplification HT Stage 100
4
All lamps
100W
settings: many of which three channels and a lot of different sounds
effects: reverb, but no

clear channel: bass, treble and volume
but two types of sound with a clear button

these two channels have EQ: bass, midrange, treble and isf

all had a master, treble and presence

The advantage is to have three adjustable channels at the base: clear, OD1, OD2, and reverb

that is, the more clean to crunch / rock and metal

Clearly, it can go
but in distortion, I found it cold, despite the limited transistor settings

I love the 3 channel

I am not a fan of the cold

No, I much prefer the Marshall

Xoran Sorvor's review (This content has been automatically translated from French)" Let&#39;s Rock!"

Blackstar Amplification HT Stage 100
4
The characteristics for I can refer you here:
http://www.blackstaramps.co.uk/pdf/handbooks/ht-stage-60_100% 20handbook.pdf

In rsum is a 100-watt, 7 lights, 3 channels but 6 sonorits.Chacun channel has a `voicing. (See handbook for more info)

- SIW (allowing the absolute give her color is more British or more than U.S.)
- Rverbe (2 sound events Dark or Light)
- Presence & Rsonnance common for all channels.

Configuration Wizard, and simple enough to quickly find the right sounds. The manual is rather light but I RPTE, there is no real difficulty in using

Of course! This head should be totally my style of music, I mainly play for which she dedicates, rock, hard rock, blues, ... . His versatility can address almost any style. I think it's clear orientation Premire. She has potential and with a well stocked guitar pickups at the pleasure is up (that said, if your log is less well at the micro level rises, you'll also fun but whatever for this head or another, all the elements of the chain are important).

In short, in the clean channel and even if it does not availing oneself of the personality of others in its category confrres of our black canvas we offer beautiful sounds with the little cherry voicing that position by sending us a more modern or more "boutique" with medium rather more presents (... I love it!)

The first overdrive channel starts with the tone depending on the gain knob position but also by the level of output prampli (volume) is heated, singing and ringing in your shovel records from a crunch dj good waffle overdrive the equivalent temprature oil fryer fries your hut prefers rush hour! I take this opportunity to emphasize an important point in the presence of channels is a volume for each channel plus the master. This allows some beautiful but also rglages and that in some intressant, play reasonably at home, without cracking the ceiling that your beautiful pre-finished LATEST week! Certainly a volume rgl a little low will tend to stifle the supply of animal but we can not have it either (well, if a power limiter original ...).

The second channel Overdrive. L is a vamp, one passes the speed multimdia, Lesz harmonics already well dchanent presents itself, the apparent phrass dpotent solos. And the amp retains its sonority his character rock wild steppes. I would say that overall the sounds are more vintage and less modern than some, it's what I like personally. So it is not really into the sound of a modern mesa, but with a rglage of Behind the bundles it is possible to be surprised by the possibilities of the craft.

As is without effect supplmentaires the HT 100 come already offers a great range of sounds, but if like me you have a group that is also in the register of times you can be add effect either the pallet and flies away.

I use it for two months and it is a pure pleasure. A head that fits in a range of average price range (semi-pro or amateurs. Personally I bought the 4x12 cabinet associated with it (celestion 80), but I would also push a 2x12 (celestion v30) and the two config will rob him.

Level finish and look is impeccable, well finished with its own vintage ts, he makes his weight but nothing serious, the 4x12 is something else (like all what cab ...). Comes with a footswitch to quality with a cable length correct (I say this because of his little brother the HT-5 I also availing oneself ...). I personally wish to have the footswitch on the possibility of moving from a voicing the other is possible if one adds the FS-4, but so far as to do all the same would t nicer. A regulation of the focus gain on the clean channel would also apprciable t, but ... everyone know the crmire, her smile, her ass ..., do not push the price this

I also availing oneself of a Fender Deville that I still use regularly to suit my needs, but the versatility and sonority of Blackstar do that right now is my main amp.

Blackstar makes very good products and they prove it for some time. The rest is a matter of ear, the sounds character dlivr the amp will please some and not others, but one thing is certain there is nothing really sharp reproach, this award and what the quality level I re sign with both hands for sure!