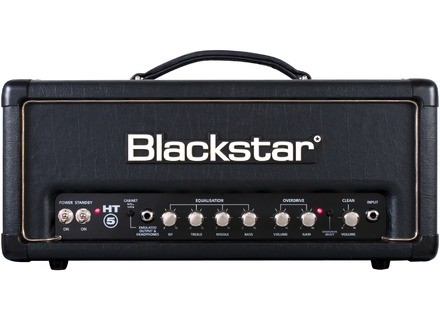 Blackstar Amplification HT-5H
5
BLackstar is one of the best amplifier companies in the world right now. They have been really pumping the market with their products with artists jumping on for endorsements all the time.

This amp is exactly the same amp as the famous combo HT-5. This one is just a head version and you will need an extra speaker cabinet to go along with this amp. You get all the same great features and tone as the combo but just in a lunch box size amplifier head.

I like this amp with just about any guitar you decide to throw at it. I particularly like this amp with a solid Gibson Les Paul. I feel that the two were fit for each other. Is is natural because the voicing of this amp is very Marshall-esque and British flavored so this amp would work well much like a Marshall would with a Gibson guitar. It seems like perhaps the builder of this amp voicing the amp towards the Les Paul because the tones of it are just flat out amazing!

The clean channel is very good and very reminiscent of an old Fender deluxe amp. When You crank up the volume you get a great classic rock tone ala AC/DC or Led Zeppelin.

Overall this is a very solid amp for the money. At new these amps come in at around $329, which isn't a bad price for this high quality amplifier. I would recommend this amp to anyone who wants a great sounding tube amp that doesn't want to pay an arm and a leg to get one. This is a great amp to record with and an excellent amp to practice with in the home or office.
Did you find this review helpful?yesno
»

Blackstar Amplification HT-5H
4
Everything has already been said by others.

HOWEVER, the effects loop: I declare a volume problem between clean and distortion. Problem that distorts a loop when using a Loop Station.

I used four years and I've always enjoyed the sound. Having freshly put together a group, the 5-watt HT-5 were no longer enough.

This amp is a great compromise lamp for you living room between Marshall, Mesa Boogie, Engl ...

Under the same circumstances I will redeem Blackstar!

legumann's review (This content has been automatically translated from French)" Solid"

Config ultra simple, manual unnecessary.
Just be careful to comply with connecting HP and the impedance (if 1/2 or 4 speakers).

The sound is very good, clear one obtains an excellent report, well rounded bass (even moderate) acute and well rendered.
In drive: crunch blues to metal, with a sound type from Marshall Mesa short even at low volumes, but happiness!

One regret, no reverb ... damage.
Otherwise, this is a great amp, very well built, solid: in short, quality.
The quality pay, and there for once, it is expensive watt, but for the studio, the apartment, the repets (without battery because otherwise too lightweight), we obtain a set that has the mouth and rocks!

The downside for the footswitch cable whose length is just ridiculous.

HT5 design comes directly from the now famous Blackstar pedals. This is not a dual VAT, but rather a "super drive HT", equipped with a true eq, gain much more important and a clean channel. It is of course, in this case, thought of as not as preamp pedal.

12BH7 the lamp is normally used in stereo. The choice decet funny lamp power must be that Blackstar wanted to achieve miniaturization of a two-channel 100W stacks. Opposite approach of 5W-channel, which is logical. It keeps most of the sound characteristics, even pushing the beast, and suddenly it works equally well with reduced volume.

The beast is light enough to send a repeat (or transplanted on stage), even with a drummer "tough".

I did not buy the speakers proposed because the videos on the net, and the opinions of the owners of the combo, suggest that this is not the top at all (or shrill screaming). You can fold in the same budget, a Framus cabinet for example.

Important: do not trust her immediately, I feel that the amp is not "run in", ie, it must be run 2 / 3 hours and get an opinion later. Finally, if you&#39;re in a cold, please warm it before playing. It shows me more than other amps, but it really does sound better when hot.

Clean very very nice, especially when you start to thrust into the towers, there is a slight crunch, very musical, which also depend on the output level of the guitar. With eptite TS9, we ventured on a flat strip of BB King or Robben Ford. Do not wait as long fender sound is more raw and less flattering. Personally, I prefer the texture of this channel with the ISF to 10.

The OD: the saturation rate is significantly higher than the od of HT HT or dual drive. You can type in the metal, but it&#39;s still an overdrive and not a distortion. The saturated fat but is still accurate, it is a little less invaded by harmonics with the pedals, but they fall under the fingers easily. In "English" (ISF 10), it is rather in the classic rock with a little less saturated, but also a slight difference in volume. The grain is surly. In "US" (ISF of 0), it increases in thickness, the sound is fuller, less aggressive, yet more saturated. I have a preference for the TFR of 3. Ideal for soloists, large saturated modern blues (ZZ Top) to heavy. We are in a register "medium expressive singing" on Satch, Jeff Beck, etc.. Everything will depend on the degree of saturation then.

The ISF is very effective, but may be less drastic than on the pedals. However its setting is very important for the type of grain even if you stay in the blackstar. Similarly, setting the ISF will be interesting combined with a good EQ setting.

I would put 9 because I wish to clean deu switched to 10 in the isf saturated with the ISF to 3.

Here I have one month this machine, and I&#39;m delighted. It is convenient and music and allows me to juggle the styles that I practice. As lead guitarist, I&#39;m glad I finally found a quality alternative to my jcm 800, to obtain a good saturation, singing with a sound whose characteristics are not "exaggerated", as in most productions current, including Marshall.

Saturated side, it is somewhere between an overdrive and distortion, warm, singing, but not stiff or supercharged. Exactly what I was looking for. The clean is very nice. I knew better, but this is obviously not to be sought first in a 2 channel.

I had a bunch of gear, sometimes very expensive: JVM 100 212 Rivera, Brunetti Star-T-Rack, Engl (thunder, classic 50, Powerball), Peavey Classic 30 and Delta Blues 15, Fender Blues Junior .. . Frankly, if we get no say its "authentic" as my JCM800 2210 (the best) or Brunetti is a nice alternative to amplifiers "terminator" is exclusively dedicated to metal or blues, etc.. And personally, it is the only grain with me "fatigue" not the ear.

EDIT 7 months later ...
Always happy! The guys stare at me when I say that I come again with a 5w, then ask me what it is that mark out ... Over time, I would say it blends better with my Framus with my old Marshall 4 * 12, and needs to be pushed into the towers for that.

Did you find this review helpful?yesno
»
Read the 15 user reviews on the Blackstar Amplification HT-5H »

Published on 11/14/08
The HT-5 is a studio and practice amp, packing all the tone and features of the award- winning HT valve pedals into a two channel, footswitchable valve amp format.