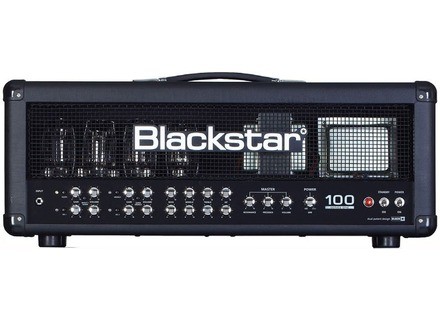 Series One 104EL34, Tube Guitar Amp Head from Blackstar Amplification in the Series One series.

Blackstar Amplification Series One 104EL34
4
Blackstar has made a huge splash on the amp world in recent years. They have made great sounding fantastically priced amps for the masses. The price is what is so amazing to me. The amp sounds so very good and to keep their prices for a multi-channel combo like this under $1000 is remarkable. Blackstar has effectively used a great design as well as superb marketing which has enabled them to produce a great quality and sounding amplifiers. Many touring and professional artists all over the globe are now turning towards Blackstar for their guitar amplifier needs. The have successfully taking a huge niche in the market over the last few years. To add to their prestige they have included a whole line of distortion pedals as well.

This amp is a versatility dream come true. This amp has four channels and within those four channels eight different modes. You also have the famous and exclusive ISF control knob which give you even more control over the channels and top it all off with a speaker emulated output. I almost forgo that it has midi built in for switching all the channels with your rack effects.

This amp has so much to do that you think it wold get tire before you would. It has four channels and within each channel two different modes. So the clean channel is nice and chimey but also cab get dark and bulky. You get a plexi clean tone which not one I would like to emulate, but they have it. They also have a class A type mods for the clean channel. This is more of a Vox style clean which is much better. Next you have the crunch channel with two different modes. You get a regular crunch and then a super crunch mode for new modern music. The third and fourth channels are similar in their modes. Tye both have high an low high and low out put damping. You can get this amp all the way down to 10 watts. That is a huge drop in power and allows you to play quieter at home or the office.

You can score one of these amps new for right at around $1750. Not a bad price for an amp that has this much versatility and functions. Some amps that have similar features would fetch well over $3000+.

I would recommend this amp to anyone who needs and ultimate switching amp that can have more versatile features and tones than you would know what to do with. It is an excellent buy for the money.
Did you find this review helpful?yesno
»

Juitariste's review (This content has been automatically translated from French)" Excellent amp!"

Blackstar Amplification Series One 104EL34
5
100w all-tube head, 4 separated with a common EQ for two channels (clean, crunch, OD1 and OD2), and equipped with lamps Tube Amp Doctor (EL34 and ECC83) channels. Include a volume control and gain per channel, as well as settings bass, middle and treble and ISF (clean Blackstar, which can change the voicing of the amp in a rather typical british tonal response or U.S. ). Then there is a master section with knobs presence and resonance which respectively vary high frequencies and serious global and the DPR (can vary the response of the amplifier in a staggered 10 to 100w power.
On clean and crunch channels are available whenever a switch that lets you change the voicing spectrum for the clean channel (gives a bright clear sound drier, with greater treble response. Gives Warm a rounder sound with more bass), and a different setting for the crunch channel gain (the gain range is more consistent, it tends towards the free saturation).
To the rear, there is a serial effect loop with a switch output level to adapt to the effects rack or pedals, an emulated output, the footswitch jack, two connectors for the speakers with a selector 4 , 8 or 16 ohms, and finally the MIDI connectivity to control the amp via a controller.

The amp has been very simple to use. The manual has served me well understand what constituted the ISF and DPR, otherwise it is easy terrain. MIDI programming seemed to me a little more complicated for those who have not used.
Configuration is very simple, one to four channels, a clean, crunch (each with two voicing), and two distortions. No unnecessary or useless modes, I've always found an interest in each sound obtained with this amp (well certainly this is a more involved review)

Ahhhh for her, there's plenty to do ...
The clean channel is certainly not as a crystal fender know them, but it is a good clean, it will grow accordingly (or microphones with a large output level, I think by example a seymour SH-6) before cruncher. The voicing switch allows you to fit your guitar, or your preferences. The crunch channel is extraordinary, with an average grain superb musicality. We do a lot of little things, for my part, it was to play ptits Plans blues with a bit of reverb, varying the attack: the FOOT! (Super crunch mode is less interesting to me, because damn overtaken by OD1 and OD2)
Precisely saturated channels are great too! The OD1 offers a saturation in the British spirit (although it may vary a little with the FSI), with a rather open grain, thick, fat, great in my opinion, and race knob perfectly usable gain . The resumes can OD2 OD1, but with a more compressed saturation and finer grain and tight, perfect for well lead solos, or multi-metal style. In short, this is a very off-road amp that can do many different things, and do them well. I also support the fact that this is a very malleable amp (there is almost what one wants), and a different response after the guitar that he branch. For my part, I played it plugged into an orange PPC412 cabinet with an ESP Eclipse II equipped with a set of bare knuckle the Mule, a fender 60's classic player, and Wild Custom wildone III, and the answer is really on every guitar, even if at the blackstar grain identifiable.

I have owned this amp from September 2013 to February 2014. I ended the exchange with 45w combo version of the series, because that-100w for use as room Amp work, do you ... (I got fooled by the number of social pressure watt ^ ^) and also because it is a super heavy head! (At the same time, they put good transformers, then it is necessarily weight)
1500 euros on average for new, is very correct, if the report is made with the Korean manufacturing under license. Before have I had several amp (orange TH30 and Thunderverb 50 Marshall JVM 205, blackstar HT20), and I could never find the same satisfaction as when I use my Blackstar HT20. There was always something in the sound that eventually annoy me, so I stopped beating around the bush, and I took the blackstar (with more power for the stage), and I'm perfectly content .
Did you find this review helpful?yesno
»

This amp has a power reducer called DPR which reduces the power to 10W.

sold with the footswitch, MIDI-controllable input and owns thru. Also provided in the box the manual in French and speaker cable.

This is an amp all there is no more normal control hidden buttons are well anchored in the front.

The common channel equalization is not a very big problem but you will not have a clean sound to the fender with a crunch to marshall for sure.

Controls for each channel are independent gain and volume controls are the common three-band EQ and ISF. The master section includes master volume, presence and resonance knob and DPR.

MIDI integration is very simple, the manual is clear enough to change the channel reception and preset channels.

We may regret that the effects loop is not detachable and can be assigned to a channel.

Easy to adjust 4 channel offers a real variety of sound.

One of the series in backstar gives high gain in the sound but not that the clean channel is a real clean and crunch channel high gain not in its normal mode.
OD1 and 2 channels sound fairly close with a more pronounced compression of the two, the gains being totally independent it is simple enough to make a rhythm and a lead channel in the same tone.

The crunch channel has a switch super crunch, this one to boost the crunch sound a bit like a marshall JCM800, it is not clutched the footswitch and leads to a different set up the equalizer.

So I have the EL34 version that sounds more Marshallian and less metal than typed version 6L6, equalization is effective we can get clean enough or dug very medium but the sound is fairly neutral compared to a Fender.
The crunch is more like a marshall with or without the super crunch, the OD are also flexible enough you may well have dug to the sound of metal as the medium, although this is his égalsieur taf and the ISF can manage the overall sound mind.

DPR allows reduced power but it also allows for varying degrees of power tube saturation which affects the overall dynamics of sound. By turning this knob you get a little crunch more or less compressed.

Personally I would have liked to crunch channels rather than two OD because I would have found it more versatile but it is not necessarily the aim of this amp.

It was therefore a proper clean, a crunch or a big crunch very strong and his two saturax High Gain voicing the modern. I did not scratch with microphones designed for big sound but I am seriously considering buying one in to make something a little more graou.

I have 6 months from now, I have two other tube amp and already sold my first.

I love this amp with british said his character with a beautiful medium, one can tater pretty much the same style with the extreme though it is a priori less suited for the metal with her boyfriend of 6L6.

It's expensive, but still has beautiful asset, including the effects loop with switchable level (OD2 with the MXR Carbon Copy and off you go to choruser of death), 4 channel instead think which does not limit the style, controllable by MIDI.

I recommend the test of "Anderton's music" to give you an idea of ​​sound that can be drawn.

Unbeatable value for money. Sounds like big, I had: single mesa recti, Bogner Uberschall (which is unbeatable at all points of view, but its price !!!), Engl fireball ......

So I make the PowerMetal I deliberately EL 34 version instead called 6L6 (metal) because I wanted a more bold, I really wanted to change surgical type sounds very ENGL.

Paris won as the head development of serious and beautiful guitar with no worries suitable for large view his very big sound.

Really a lot of density in the sound.

And finally able to curb the power output of 10 to 100 watts with all intermediate values. And that's the bomb ....

Small flat, a TFR for clean crunch, OD1 and OD2 in one, from a channel and a switchable effects loop would have been nickel ...

95% satisfied.
Did you find this review helpful?yesno
»

See all 30 photos of Blackstar Amplification Series One 104EL34 »

View all 3 videos of Blackstar Amplification Series One 104EL34 »