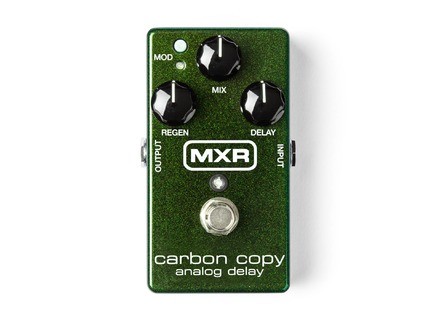 MXR M169 Carbon Copy Analog Delay
5
The pedal is nice and compact...no bigger than a phase 90. Sound-wise it's not quite an echoplex...but does have warm tonal characteristics that remind me of the old school delay sounds. The modulation button is a nice touch and does sound similar to the tape warble heard on the echoplex. It basically varies the speed of the echo...creating a chorus effect when heard along with your original signal. This is a very subtle chorus sound...but that's how I remember (and like) it. The pedal will also self oscillate when the repeats are pushed to the max for some crazy sounds...just take care not to blow up your speakers. I did notice some very minor noise on the longer echos when playing clean bright tones, however, I've read that this is not an uncommon thing with analog pedals.

It's very easy to set up and get a good delay at any point.

I had the privilege of using an original Echoplex delay box that was lent to me years ago. After returning the Echoplex, I've relied on an inexpensive digital delay pedal that recently began to bomb out on me. After reading a lot of info and positive reviews on the MXR Carbon Copy Delay pedal, I decided to take the plunge and purchase it. I must say that I was pleasantly surprised.

My only gripe with pedals like these are the internal controls. Personally, I think the whole trimpot concept is barbaric anymore. It just doesn't make sense to make the user disassemble an entire pedal to access additional controls. I doubt it would take much for Dunlop to drill an additional 2 holes into the housing to accommodate these features. Also, take care when disassembling these things. The jack threads are made of plastic...which can cross thread very easy if the metal nut fastener is tightened too much or incorrectly.

Overall a really nice pedal. I was initially concerned that the 600ms delay wouldn't be long enough...but as it turns out...it's actually a little more than I need. Sounds cool, looks cool, and not too pricey. I think most musicians will find this a valuable addition to their setup.
Did you find this review helpful?yesno
»

MXR M169 Carbon Copy Analog Delay
4
The MXR M169 is loaded with a wide variety of analog and digital delay models of famous pedals and devices . Also has basic sampling capabilities which I am not all that familiar with. It is a modeling device. You can use the knobs to tweak each delay to your needs but you can only store three of your settings at once. There is a toe tempo tap button. The pedal has stereo/mono inputs and stereo/mono outputs. The unit requires its own proprietary power adapter. The unit is very solidly built but has a very poor reputation for the reliability of its buttons.

The setup of the pedal is kind of ergonomically ideal in some ways but you quickly wish you could store more than 3 user settings because there are lots of cool models. I greatly appreciate that there are user friendly knobs for quick tweaking and not digital menus which are time consuming and nightmarish.
The manual is very cool too with neat information about the original devices that the models are based on.

The unit is very quiet and designed to be used on the front end between your guitar and amp and not in an effects loop where it apparently doesn't work well. The models are good and the pedal is fun fun fun. However it is important to realize that this is a modeling device and like all modeling devices it sounds cold, sterile, and artificial and will interject that sound into your chain.

It is definitely a cool pedal that has been around for a while and needs to be updated with the capability to hold more user settings and needs to have its reliability issues fixed.
However I refuse to use this delay as part of my main sound because of the sterile artificial sound that the modeling interjects even for some reason when the guitar is plugged in the unit but the effect is bypassed.

MXR M169 Carbon Copy Analog Delay
4
The MXR Carbon Copy has a completely analog audio path. This pedal has around 600ms of delay time with optional modulation. The pedal has a basic three knob setup for a delay pedal, Delay time (0ms up to 600ms), Mix (lets you adjust the amount of delay on the dry signal), and Regen (the amount of repeats after the original sound). The special thing about this delay is that they throw in a modulation button to allow chorus sounds on the delays. The width and rate are available for tweaking from inside the pedal via two user adjustable trim pots. The pedal is true hard-wire bypass so there is no tone sucking at all. The pedal runs off a single 9-volt, but it drains batteries like crazy so you’re better off using the 9 volt power supply. A bright blue LED lets you know if the pedal is on or off from a distance on a dark stage.

The pedal is very easy to hone in, just set your amount of delay and how many repeats you want and how loud you want them compared to your original sound and that’s it. No need for a bunch of menus or useless functions. I would have liked for MXR to have put the rate and width adjustments for the modulation on the outside of the pedal. The on and off switch is big enough to tap with your toe if you are a sharp shooter, making this switch a little bigger would have been better, but at the cost of a larger size. This thing is only the size of a Phase 90 and that’s part of the charm. Solid feel and a solid switch on this pedal.

This thing sounds very great for a modulated delay, or for an analog delay sound. The repeats are very rich and warm, so if you are looking for an exact sounding repeat you might want to look at some Boss pedals from the DD line. This isn’t a digital sounding delay, and I think that’s a great thing. It’s very natural sounding and musical, it blends with your tone and adds ambience, it doesn’t just repeat it. There is also no annoying click when you turn the pedal on like there are with some delays. No tap tempo or presets, so it’s a one trick pony unless you are able to bend over and change the settings during a song. It does a great slapback to fatten your rhythm tone, or does a great “Gilmour” tone with the modulation on and can get rather spacey.

This is a great pedal for a basic straight up delay sound. The quality of tone is there for all your basic needs. It has great warm repeats that are in a very usable range, I don’t know who needs much more than 600ms of delay, but it’s plenty for my needs. Mixes very well with other pedals and is built to stand up to the test of time. I think there was a bad run of these when MXR put them out, but since then I have not heard of anyone saying anything but positive praise on these pedals. A great barebones delay for all users and at a fairly decent price for the quality you are getting.
Did you find this review helpful?yesno
»

MXR M169 Carbon Copy Analog Delay
4
The MXR Carbon Copy analog delay is designed to be a pedal that can capture many of the vintage analog and echo type tones used by players from the sixties onward. It's a very simple pedal, with only three controls as well as a modulation switch. There is a control for the effect level, the length of the delay repeats and the amount of times that you hear the repeats. Hitting the modulation switch adds a bit of swirling, chorusing sound that harks back to the old tape Echoplex units with their modulating heads. It's finished in a really cool dark sparkle paint and has a plug for a DC adapter as well as a spot for a 9V battery. It doesn't have a lot of the other features of similar BOSS or TC Electronics units (IE: tap tempo) but it makes up for that with a pure and awesome analog bucket brigade delay tone.

Setting up this pedal for use is extremely simple. As stated it only has three controls onboard. Mix controls how loud the effect is, Regen controls the time of the repeats, and Depth controls how many repeats you are hearing. The pedal goes from slapback type country delays to longer David Gilmour esque lead delays simply by turning the Regen knob clockwise to get a longer delay time. It's really quite versatile in that regard - you don't have to do too much as far as changing the pedal settings to get a wide variety of good and diverse tones.

I've used the MXR Carbon Copy with various Mesa Boogie, Splawn, Orange and Peavey amps. I definitely preferred it in the effects loop of an amp as it sounds much clearer and crisper, especially with gain added. The tone of the pedal really doesn't cut into the natural sound of the amp being used, which is a great thing. The pedal works great for slightly trippy sixties style clean tones in conjunction with the modulation button. I found myself really loving that and the slapback type settings for when I wanted to use the pedal on clean settings. When it came to using the pedal with overdrive I definitely preferred using it as an enhancer for leads - using the longer Gilmour type delay times to really make the sound very smooth and liquid-y. Though it was definitely not quite as easy to balance the delay for clean and lead tones, once I figured it out I was contented to use the same settings for well over a year.

All in all I think the MXR Carbon Copy is a great analog delay that is priced reasonably and sounds very true to the units of old. It's about $150 new and is well worth it. The tones are very vintage, but they still sound clear and defined for the most part. I don't care for it as much in front of an amp as I find it gets a little bit fuzzy and diluted, especially with gain added. That all being said, if you're looking for a great and pure sounding analog delay pedal, you really can't go wrong with the MXR Carbon Copy.
Did you find this review helpful?yesno
»
Read the 38 user reviews on the MXR M169 Carbon Copy Analog Delay »

Other MXR delays/Echos/Phrase Samplers for Guitar