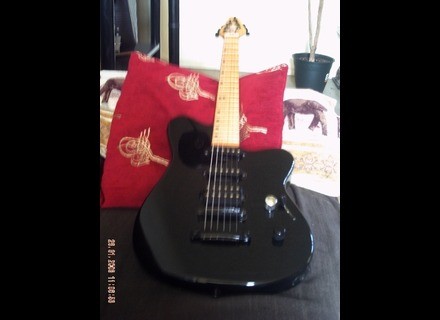 Samick RADIO TEN BLUES SARACENO
4
The Samick Radio Ten was made in Korea in the mid nineties as a signature guitar for noted rock instrumentalist (and Poison's one time guitar player) Blues Saraceno. It's a very interesting and simple guitar that eschews an abundance of features to create a great playing and sounding instrument. They came in various configurations for pickups/bridges, but mine was the following:

It's basically like an obscure old sixties guitar mixed with a superstrat from the Van Halen school of thought. It reminds me of a Jazzmaster meets of a Wolfgang as far as the body shape goes... very odd at first, but awesome.

The guitar is very ergonomic to me. The weight is very light and it's no problem at all to strap it to my shoulders and play for extended periods of time. The upper fret access is very good too. The neck heel is a tad blocky but it's not difficult to get used to by any means.

I should take a second here to mention the neck profile. It's a much beefier profile than one might expect from a guitar designed for a hard rock player/shredder. It's closer to a fat baseball bat profile or a rounder version of the Gibson '50s neck. It's personally one of my favourite neck profiles on any guitar that I've owned or used, but it's not what you might expect from a shredder's guitar, nor will it be for everyone. If you like thinner necks and swear by them, this neck probably isn't for you. However, if you're into a fatter neck like the Gibson '50s or similar, this neck is great. Mine also has slightly rolled edges from being played fairly hard for about 15 years before I bought it, which makes the neck feel nice and vintage. It's finished in what feels like a very thin gloss finish. It's not ridiculously obtrusive to the hand, and only gets sticky or dirty feeling after playing for a very long time or with dirty/old strings.

I've used this guitar with various Peavey, Mesa Boogie, Splawn and Orange amplifiers that I've had over time. It has a very interesting set of tones to be sure. The pickups have quite honestly lost their appeal to me. I remember getting a great ripping EVH esque tone out of the guitar when I first bought it in summer of 2009. It had a nice full bass, slightly scooped midrange and a nice biting treble with that classic eighties LA sizzle on the bridge pickup and a fairly full and classic sounding tone on the neck pickup.

However, at this point in time I simply find the pickups to be fairly dark and a bit lifeless. Perhaps it's nostalgic feelings that I have, but I'm not totally happy with the pickups at this point. I have a plan to overhaul the guitar at some point and that may include a replacement set of pickups if the budget allows for it. Don't get me wrong, it still sounds good, but just not quite as good as it did when I first purchased it. However it IS a $150 guitar so I can't be too picky about the parts used.

All in all I feel that the Samick Radio Ten is a really cool sleeper guitar that has some wicked features. I bought mine for $150 at my local Long & McQuade, who had no idea what it was. I saw that it had the name Blues Saraceno on the headstock, so my interest was piqued. However, being that I've rarely been impressed with Samick guitars throughout the years, I wasn't expecting much. I took it into the amplifier room to plug it in and test it and ended up walking out with it! For the $150 I paid it's been a great workhorse. Sure the pickups have fallen out of favour with my tastes, but I may eventually change them. Presently the white finish is showing quite a bit of wear and tear, so I'm debating having it done up like Blues Saraceno's Custom Shop TV Twenty model in plaid finish, and then replacing the parts with ones of higher quality. However, like I stated before, for $150 I can't complain about the quality of the parts. The craftsmanship is great, the feel works for me and the price was right, so I've held onto it. Great buy!