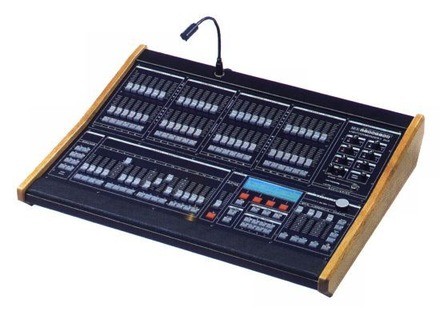 All user reviews for the Ma Lighting Lightcommander II 24/6

pololemineur's review (This content has been automatically translated from French)

Ma Lighting Lightcommander II 24/6
4
I've seen around her or her big sister's 48 / 6 is an example of reliability and simplicity that ds is over you feel at home electronic patch is simply a killing The record chase, the memory is as a letter in the mail, it has the famous eight buttons spcial very handy for quickly reminds one state or for the color changer. A return of regret chaser seeking a helping hand and assigns of the possibility that 4 per page chaser mmoires.Il also lacks a VGA output to display the state and for better readability when squence use. In short if one day I put in a 3000 console is the one that I take without hesitating.

OwInTwIsT's review (This content has been automatically translated from French)

Ma Lighting Lightcommander II 24/6
5
This console is, to my taste, one of the best and most flexible that I met.
Often crossed by small theater or concert hall, not using slave (or another console for the second automatic universe), it takes advantage of an easy grip while remaining full (with, among other , a very intuitive machine patch) ...
Another advantage: it is relatively common, and you come across often in home theater or you could work.

Currently used in the theater where I am, and if one day, I intend to settle my account, it is this table that I will buy!