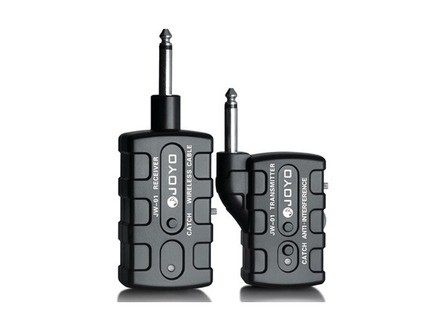 « Good depending on your setup »
4

View other reviews for this product:
1/ How long have you been using it?
A few months. I waited until I had tried it several concerts before posting a review...

2/ Did you try any other models before buying it?
No. Portable UHF VHF are very expensive. I only started to follow what came out after hearing about new technologies with the LINE6 PhRelay (expensive as well). Moreover, it isn't easy to find the Joyo JW-01... I made up my mind because its price is reasonable, and I told myself that if it didn't really suit my needs I could always resell it without losing too much money.

3/ What's the sound quality like?
Its sound isn't flawless. It doesn't have much noise, but it does have some crackles that, evidently, can be heard proportionally to the amp's gain.
I tested it with two very different setups:

3A/ With a VOX tonelab, all digital that is, even if a preamp tube gives the impression of it being analog

, it's unusable even with a clean sound. But to be totally honest, the Tonelab's clean sound is full of effects. I think that having two very average digital stages, one after the other, is unforgiving. The signal-to-noise ratio explodes and the dynamics are very affected! So forget it for this setup. I think you could get the same results with a POD.

3B/ With an ENGL savage head and a rocktron repliflex in loop (in series):
(Do note that this head doesn't have a noise gate, but the repliflex features a well-made HUSH.)
The problem is gone. The clean sound is well reproduced and the dynamics fairly respected. To be really convinced I did several comparisons JACK/JW-01 (at home so I had to do it at very low volume levels).
For live, it's more than enough, unless you expect a pro level, but in that case I don't think your are reading the right review here...
True, you must avoid leaving a lead channel with too much gain on when you are not playing, but I think that's acceptable, even without HF.
No problems four times live and half a dozen rehearsals under "real" live conditions

4/ Battery life
It takes one hour to charge via USB. Important: only one 220V charger is included (it must also be said that the chargers are standard) but you need to charge the transmitter and receiver.
Duration, approximately 2h30. Beyond that it still works, but the noise starts to rise... so we need to go back to the jack (or buy two transmitters!) I'd say it's more than enough in 95% of cases.
I can't however be more precise regarding battery life in the long term. In theory it's one of those "memoryless" batteries, that said... it's up to you to trust it or not.

5/ How would you rate its value for money?
Very good, because there aren't any cheaper ones, and it works fine.

6/ Based on your experience, would you buy this product again?
Yes, because it's enough for me.
But if I only had a VOX tonlelab, I would've probably rated it 1/10 stating that it's useless.

7/ Other comments:
- Non "standard" connections, it connects directly to the guitar's jack. I suspect that it won't fit a guitar with a strat-like connector (where the jack is a bit recessed). Although you can certainly use a 1.5ft extension and attach it to your belt. Personally, I think it makes the product more fragile and when it comes to aesthetics, it isn't very appealing.
- There's a mini-jack on the transmitter to connect a mic. I didn't test it.
- Browsing on the Internet, you can find it much cheaper that on a brick and mortar store.
- (I repeat myself, but it's crucial). You need good gear behind it to be able to use it: a good HUSH (or an ISP decimator, I also tested it and it works), and preferably a NON DIGITAL amplification chain.</div>
Did you find this review helpful?yesno
Cookies help us improve performance, enhance user experience and deliver our services. By using our services, you agree to our use of cookies. Find out more.