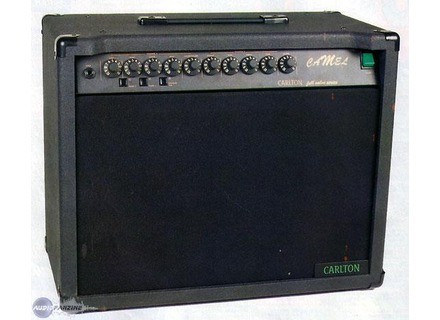 Its rather typed Marshall. But do not dream, if you want the marshall, you will need a marshall

I have kept a few months because it requires trimmings that I was not prepared to do. Indeed, the audio channels had different volumes too. The saturation was much more potent than clear.

Looking back, I will not buy more. Indeed, there is no miracle, missing and unknown brands, they are often not good business.

monolithe's review (This content has been automatically translated from French)

Lead channel:
it picks up where the light was left with the clean channel and it's just not going to sound very acdc, led zep ...
the hump1 provides a sound type fuzz has grown back,
with hump2 soften the sound very clearly and is perfect for solo-type guns' etc. ...

The reverb is very long and not really a musical for sounds from clear type Hank Marvin etc. ...

Good effects loop but not so adjustable limit.

Amp ultra versatile.
No pdalier.
At the time very cheap: 4000F
But not very strong, it seems that many amp broke down ... including my own.
On an amp that works the note goes to 10 without problems

Little_Paco's review (This content has been automatically translated from French)"DIY"

Carlton Camel 50
2
FT50 ​​The Carlton is a two channel tube amp 3 12AX7 for preamp and 2 EL34 power. It&#39;s not quite a while since the light reverb and effects loop are managed by operational amplifier. At the same time make lamps for the reverb and effects loop is luxury, and this amp is not luxurious.
The HP was a G12T75 home in a cab in Medium ugly good on the other hand, 29 kg is not cool.

It is a true two channel with volume and channel on the equa clear, and gain volume in the equa saturated.
Plus two Hump. These are actually two effects pedals built into the amp, the OD is a Hump1, TS9 way, the Hump February 1 disto way I know. Rather a good idea.

The following may vary depending on the version, here is what it&#39;s mine:
Level connectivity, a guitar input, two speaker outputs, which mutate the internal HP, an effects loop with volume adjustable to send and return, a footswitch jack to jack and one RJ45 for fooswtich three buttons.
There is also a switch to switch to triode (it divides the power of two, so it&#39;s always very strong, on the other hand texture of sound changes). Another switch that allows the action of inactivated Hump on the clean channel.

The config is simple, easily obtained a good sound.

The manual is in an A4 sheet, it is clear, could clarify a few things like having to bias the amp after a change of power tubes, but good.

Level use, operation of Humps is not super intuitive at first, but once you understood it quite well thought of.

A defect, however, the receiver being encased in relays, to avoid the plop change channel, it is mutated. Result to change the channel must make a habit of giving small pulses on the footswitch, as indeed we at the feet resting on a button not sound like something a little joker.

The reverb is not great and appeals for an amp a bit hard to work properly.

The humps are interesting, well yeah overdrive a tube amp is a good idea, except that with respect to a distortion pedal bin is no adjustment, which is annoying.
So we can not choose the rate of distortion of each pedal that is not annoying, because it is attached to values ​​rather wise, we chose not the tone either, a shame but not too annoying either, and we chose not the volume of each of the humps, it is on the other hand a little bit trickier.

Indeed, when the rate of active distortion is increased, which is rather in the right direction. As against the overall volume him, does not always change for the better (it depends on the gain setting on the drive channel). If the gain is low down the volume when you activate the Humps (and it&#39;s totally productive cons), if the gain is set to 14H or the more things change or not it increases. Basically if you want to use the humps were sentenced to a rate of gain already fairly advanced.

I use it for 4 years, I like it is cheap, full of good ideas, and misunderstood. As the more he begins to show its age, and when I plug it in as I play more of a surprise.

I tried a lot of tube amps and frankly, this white elephant is very far from a dung to the sound level. The humps are funny but could be more useful.

Good point that the big upset: reliability. Play with this thing is still slightly broken jaws.
In the words of my favorite retailer, is one of his worst memories. I remember well his head the day he had received, he was not care, that thing was too great and super cheap. Appere six months later when three copies were sold for revenue down, it was clearly less enthusiastic. The amps have a crazy time to return the plant was overwhelmed, and finally while deerniers copies were clearly made reliable, the box has closed ...
The electronics is completely integrated so complicated, and is super evil done, everything is PCB and a PCB very very badly decayed that supports changes in components too regular. Moreover, the main PCB of the card is installed in the chassis in a humorous way (or outrageously silly choice).
It seems that on the first copies of the lamps powers were mounted directly on the PCB, lamps super hot glued to a PCB Desousa crap in here is a good idea.
On mine the EL34 are connected to the PCB by son, and are screwed to the frame, no problem. The lamps are installed on the preamp PCB, but that&#39;s normal.
Cons by the PSU is a little space ... Voltage power supply of the preamp is more than 350V which is a bit rough though.

In short, if it&#39;s cheap if you know a little tinkering with tube amps, it&#39;s a great craft fun, little fun to customize it a bit.