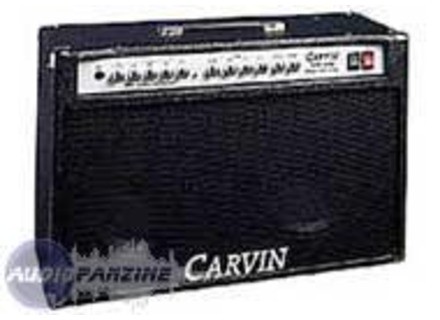 Carvin MTS3212 Combo
5
Acquired from private party through ad. I wanted a break from my Crate practice amp, and the Carvin was well reviewed as being suitable for both Strat & 335 type guitars, and I own both. I paid $350 used.

This amp sounds great! It can easily accommodate either a Strat-type (I have a Washburn clone) or a 335-type (I have an Oscar Scmidt OE-30CH, reviewed elsewhere on Music Gear Review) guitar. My son has a Carvin Belair, which sounds great with the Strat, but can't handle the dark woody sound of the 335 type with flatwounds (It loses too much on the high end when on the dirty channel). I tested the amp with both guitars prior to purchasing, and it sounds great with either. It has the highs wihout being "shrieky", and provides the tone that makes people love strats or 335s, out of the same amp, which I think is rare.

The only thing I don't like about the amp is really a little picayune -- I prefer a tweed amp appearance, and this one more closely resembles a silver-face Fender. I suppose I can throw a tweed cloth over it and get over it. It doesn't affect the sound, but does reduce the "vibe" of the amp. To some people it would be a plus -- a real sleeper -- looks like a silverface Fender, sounds like a cross between a bassman and a marshall cranked.

I don't haul it around, so I can't speak for durability. I bought it used, and it looks new. I just keep it in my closet (I open the door to play it), so it doesn't get gigging wear and tear. It appears well made and sturdy in construction.

Great amp. I would recommend it to anyone who is looking for an amp in the 50-100 watt range. It has a switch for half power, which I use, since I play in my bedroom. It is equally at home with Strat or 335, so if you play either, it should ring your chimes. Never played it with a Les Paul or SG, or anything else, so I cannot vouch for those.

Carvin MTS3212 Combo
4
This guitar amp is a 2x12 combo tube amp. It has a variable wattage for different sounds. This amp can get very loud - so it would suffice in terms of playing live for all but the biggest venues where you'd need to get into the 4x12 cabs. It has a standard 1/4&quot; guitar connection. It has two main channels - a clean and lead (distortion). It comes with a pedal switch. It also has a nice sounding spring reverb in it, which can also be switched with the pedal. Both channels have limited EQ - a bass, mid, and treble control. The lead channel also has a drive knob for more or less distorted tones. There's also a presence controls on both channels to get a boost in the ~5khz area to help the guitar cut through a band or mix.

It's quite easy to use. The setup is fairly simple. Replacing the tubes is a bit of a hassle however. You can get a decent sound right away, but you'll have to do a fair amount of tweaking most likely to get something good. The manual is pretty basic, so it's best to explore the options on your own with this amp.

This would suit almost any kind of music, because of the range from clean to heavy distortion you can get. I use this mostly with a Telecaster on the clean channel. The clean channel is the real draw with this amp - it sounds great! The distortion you get is okay, but not outstanding. It is also a little too noisy than what I like on the distorted channel. The clean side again sounds great and you don't have to do too much to it, but with the lead channel there really is just sort of a range about halfway turned on the drive knob where you're going to get any nice distortion tones. Less than that and it's barely there, too much and you quickly are just into a wash of noise and indistinct notes.

I've had this amp for about 2 years. I mostly like the great sounding clean channel, and the nice spring reverb sound you can use. I don't like how much noise there is on the lead channel, and the comparatively limited range of distortion tones you can get with it. I would say it's a moderate value for the price - this is sort of a middle of the road amp. I might make the same choice to have a really solid clean channel amp, but for distortion tones you might be better off with a fender combo.
Did you find this review helpful?yesno
»

asseoa's review (This content has been automatically translated from French)

Use could not be more intuitive:

1. We ask (of all fawns, given the weight, it is not the time: p)
2. It is the branch
3. One power switch
4. It waits 20 seconds prchauffe lamps (if it was a collection outdoor scne in the Nord-Pas-de-Calais)
5. During the prchauffe can make connections jacks (direct loop and footswitch)
6. We switch the Standby button to turn on the sound
7. Let's Rock!

English manual but trs clear if one takes the time to read it.

The sound ... talking about:

Clean
In clean, the sound is hot
Trs hot.
So if your guitar's also a typical hot, you will need
probably a oprer rglage the Clean EQ.
Otherwise, for those who love the sounds of Mark Knopfler, but happiness!
Crystal clear sound.

Drive
His aggressive enough, typ British rock (Oasis) or USD (ZZ Top) according rglages EQ.
Ideal for rock anyway!
With reverb and a little background volume, it's like on scne!

The bad thing again, the Speakers of the TRS combo is directional (no more than 30 I think!)
This means that if you play standing 2 meters from the ground amp pos ... you will hear hardly the Aiges!

What I like:
+ The quality of manufacture
+ Robustness
The EQ + spars for 2 channels
+ Power switchable 50/100 W
+ The sober
+ The sound versatile, warm clean, aggressive drive, with its personalitbr /> + The possibility to connect other than the combo Speakers.
+ It's not the amp for everyone (quite rare in France)

What I like least:
- The weight (for rpeter, do dplacer other home: p)
- The direction of the TRS combo of Speakers
- The production is stopped, Carvin flows currently (January 2009) his last stocks

I possde for 6 years and not change it for anything!