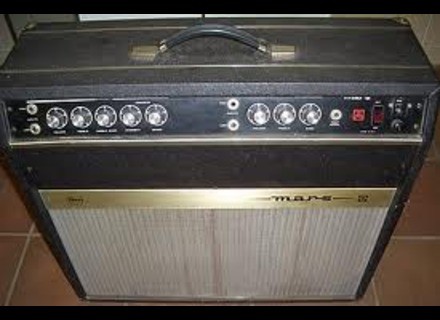 GEM MARS G30
4
as already said, he AX7 preamp December 1 and 2 el 84 power. 4 entries divided into two channels. high one on each input channel and another low. Tremolo is not bad, average reverb.
he 30watts but compared to modern tube amps it is very short, for group play is a bit tight. say that if others do not go there as it will nag. I also have 10 mg of the same brand and it is almost as powerful. he has a good 12 hp p

while for the sound, I like, but I'm a fan of the brand so my opinion is too favorable.
say that the two knobs bass and treble are doing their job, suddenly you can choose your sound. after the high entry was dry sound to the fender and when you put the sauce, it saturates a little, just what I like ...

I just bought it but I must say that I was not a gem but a Galanti. this is exactly the same, gem or galanti are exactly the same amp just they changed the brand. to have them removed is the same. I collect them, I also have a 30w head lamps, two 10w, 50w a low which is great, that's the best of the brand. I also have the small transistor 15w and I'm buying the 30w transistors that was my first amp (which explains my enthusiasm for the brand ...)
so if you find one for a hundred euros go there but do not put a fortune in there because there amps to modern lamps much better, it really is for lovers.

patrick.profit's review (This content has been automatically translated from French)

GEM MARS G30
5
Amp Italian, 70 years, a lamp (pp 2xel84) a minimum of 24 hp or 30 cm!
2 channels, one with tremolo and reverb ressort.entrees high and low on each
very good amp if in good condition (pair change and the lights and see the condo!)
its close to a vox ac 15! ideal for playing the shadows.
if you find one keep it carefully!
put it 5 stars! see also pots (kef contact)

Start with a Southwestern fiesta red tape echoes and room: his great shadows!