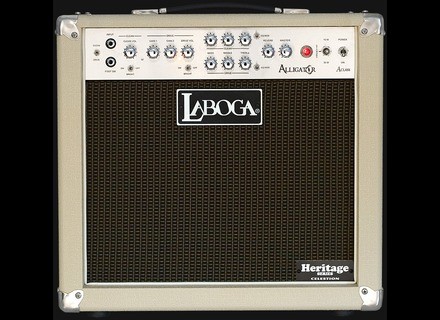 Laboga Alligator AD5201TA
4
Hello,
Amplifiacteur class A all-tube, 30W, 15W switchable in practice to keep the fun without his ears.

It is a 2 channel, clean and overdrive, but with two settings on the channel distortion overdrive. All controllable with the included bracket.
Each channel has settings low, mid, treble and a very effective volume to balance the transition between modes.

In addition to a master volume and reverb, there are several switches associated with each channel to boost medium and presence. What really sculpt the sound.

The effects loop and reverb footswitch's also (but the pedals do not incorporate and is not included).

The config is simple.
On the clean channel, the gain is relatively fast cruncher amp especially if you have a guitar with high output level (eg LP). But you can really adjust the level to keep at all times and regardless of the guitar sound clean and clear.

The channel distortion can be adjusted very easily and being able to switch from one mode that I would call the crunch to aggressive distortion is great.

It's almost three channels at once!

The switches to fine tune the EQ (boost of medium) and presence are quite sensitive. Personally, I think they do not add a little more complex and the search for her. But it's additional capabilities. I've never seen used the sound I was looking for.

The manual, I do not know if there was one ... may be on the site Laboga but frankly, it's not useful.

As the equalizer is effective, we get what we seek without pb. It's not a Boogie Mark IV that I had before, and there ... (the owners need to know what I mean even if it is a reference amp).

I do the dance so anything goes: Funk, rock, heavy rock while going very well.
I associated with the loop system Nova is very good.

The clean is different from the Fender. I find it very vibrant, not sour. Fart treble if desired. It is very well balanced. Can be drawn to jazz in the borough.
With a stratovolcano, it sends. With an LP, must adjust the levels, but no worries, it does not bleed at all.

This channel agrees very well distos complementary (Blackstar HT Dual). So, you can have a very wide range of sounds because the grain is very different from the channel distortion.

On the overdrive channel, so two sounds. Crunch and distortion. What is great is the possibility to set different levels of saturation. After the grain is that of the amp.
It is not the Marshall or on the Mesa.
The two are easily exploitable, it does not bleed. For the metal, the amp is not enough, it is typed Rock / Hard Rock. The highs are a little too present for my taste at lower volume. Corrected by the equalizer, but it's a little distortion in its tone.

The sound is very present regardless of the channel. This amp is very dynamic but can be played at volume acceptable at home. And that's good. It is on at high volume, grain generally changes a bit to round and take its full dimension.

I use it for 2 years.
I had many other amps before (including the Mark IV that I sold because they are too powerful, too heavy and too complicated).
This amp is very much more neutral in fact happening everywhere.

I just love its dynamic character and versatility, its look as great as it is finished, stainless steel buttons (or something or are costal and very pleasant to handle), the aluminum plate on the control panel is very beautiful (except with large fingerprints ...) and the coating is very nice cream. It is heavy without being a dead donkey. In any case, it is tt lamp, with transformer, it weighs.

I bought it new. It's expensive but it's good ... but a bit expensive qd. I tried a lot of amps, this one is best for me ... for now ...
His power level is what suits me, the placing of either 15W or 30W is comfortable with and responds to all situations. Repeats and in concert, I transplanted a microphone on the sound system, I do not need 100W. 30W is more than enough, I play 1 / 3 of the master.

I do it again without this choice even more if the pb had found it secondhand which does not grow on trees.