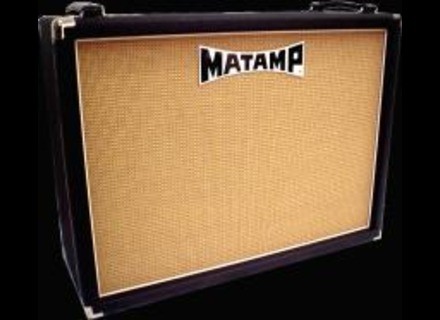 frapana's review (This content has been automatically translated from French)

The amp level connections is quite comprehensive as it has an output for a firm in 16 Ohms, with an 8 ohm output Record Out (DI = Out), footswitch input and an effects loop.

hand made in England and wired point to point, unlike almost all the amps that are now made with printed circuit boards!

Its level is really good, either in clean or saturated: dynamic and full of harmonics. The drive is an overdrive to hard rock as ACDC, Airborne, Led Zep ... With of course the two of the most beautiful effect crunches, captivating, as it can be found in Hendrix, the Rolling Stones, Eric Clapton and all periods. In general it is perfect for all the years 60-70, be it blues, rock and other styles, or more recent claim to those roots there.

This tube amp is a little gem upscale

Matamp is the cause of Orange amps (that of Jimmy Page, for example, was an "Orange by Matamp") but the brand is not distributed in France and almost impossible to find in time
Did you find this review helpful?yesno
»

See all 24 photos of Matamp Kingstreet »