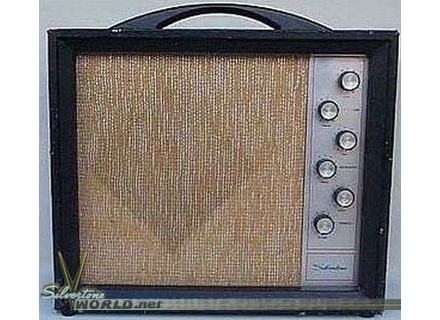 Silvertone 1472
5
The Silvertone 1472 is a compact, tube based guitar amplifier. The amp delivers 55 watts of power and has two 12AX7 and two 6V6GT tubes in it. It also has two smaller sized tubes behind these main tubes. It has three 1/4" inputs labeled instrument and microphone, although I don't think I would recommend using this to amplify any sort of microphone. It also has a 1/4" output for a foot switch.

The make up of the Silvertone 1472 is pretty straight forward and is overall pretty easy to follow and understand. As far as parameters go, it has a few different channels. For the instrument and microphone channels, it has both tone and volume knobs, and it also has built in tremolo, which it provides parameters for strength and speed. That's really all that you need to know about using this amp, so a manual isn't necessary and it would probably be pretty hard to find one even if you did want one.

The sound of the Silvertone 1472 is killer, especially considering its small size and only 55 watt output. It can definitely crank pretty loud, but I tend to keep in somewhere in the middle or lower for recording sessions. I've used the amp with a variety of guitars including a Fender Stratocaster, Telecaster, and a Goya Rangemaster, and find that it sounds pretty great no matter which guitar I choose to use. The tremolo is awesome sounding, but probably not as great as that found on a Fender amp even though it sounds great and is certainly nice to have. I've never used this with any other effects, as I really like the clean sound that I'm able to get from the amp and would probably use a different amp if I required some overdrive anyway.

Other than the one that I've used in the studio, I haven't seen another Silvertone 1472, so I'm assuming that they are pretty hard to come by and do know that they have become somewhat of a collector's item. For this reason, I don't think that this is the type of amp that you would really be able to seek out, but if you come across one I'd highly recommend checking it out or even buying it, as you never know when you might see one again!
Did you find this review helpful?yesno
»