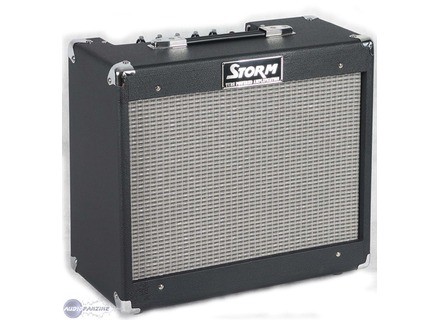 princevlad's review (This content has been automatically translated from French)

- The config. is very simple to use, 3 knobs for EQ, 1 volume and a gain ...
- For sound, see below!
- I bought it new, with a "manual" which simply say that the volume button is used to play on the volume button on the sharp treble, ect ...

Well, let's get down to business.
I bought this amp to play at home, in the apartment.
The clean is really not bad at all for a small amp like this.
We hear much heat from the lamp.
on the other hand, for saturation, we must forget. Toc gain, you will have a crunch while drooling old really not prcis grsillant and trs.

In volume, despite the lamp should not expect to shake the walls.
Anyway, to play in the apartment is a good compromise. We can push the lamp with little risk of seeing dbouller neighbors ...

Good! I plug the pedal on the amp (clean channel).

The surprise, with adquate equalization, and good distortion pedals of the sound is l.
This is what has guided my RULING when this purchase.

The big sound (shuffled gt2 branch of the loop I-8) sounds really terrible!
It is clean and incisive prcis.
on the other hand for RPET, forget: this amp is really not for a.

I use it for a year or so.
What I like most is his clear sound really good, and able to operate the lamp without rveiller the dead ....
Against saturated by its channel, do not even try, too vague ...!
Before I played on a jcm 800. Good power, is something else ...!
The marshall, I had the power and the lamp, here I found a few that sound but with less volume.
Rcemment, I have tried a marshall MG100, well ... yes there is EHJV, but the cleans are too noisy (transistors). I also tried the Vox VT15 from home, and a trs really good amp, 15 watt dpottent much more than the storm, and the vox distos are incredible.
In short nine 150 euros for the lamp more than adequate, but nothing else. Without pdalier or external effects, I'm not sure he would have sduit.
Now I think that I prfre the vox, more powerful (prvoir mlomanes neighbors) and big sound without external devices add ...
Did you find this review helpful?yesno
»

kiks's review (This content has been automatically translated from French)

Storm VT 10
5
Amp any 12AX7 and 6L6GC
10Watts
Finally, a master volume on an amplifier input range!
plus a 3-band EQ, everything is perfect

Super easy to use, is connected, it waits 2 minutes and heat lamps that we play! not need manual!
we obtain very quickly a very good clean sound with the special lamps and especially as used in Fender 6L6

Do crunch that from 6 and still, even at the bottom it saturates very little of the advantage that it can easily paste a few distortion pedals and more.
the sound is very clear crystal, relatively neutral so you can enjoy the sound of your guitar verifiable
Only negative, and again, the original HP, it will replace, but at this price it really gave when we see how we would pay the same Fender!

Please note that I am not at all agree with the previous opinion: it is not an amp for metal, its distortion is not his strong point, like Fender amps for that matter, so it had better try it before buying, if you want a big distortion DIRECTED you to Randall or Engl but this is not the same budget
or in small 5W Blackstar

Level unbeatable value for money, most entry-level amp for the same price are 5w, while we already have a nice little 10w with a very nice clean sound!