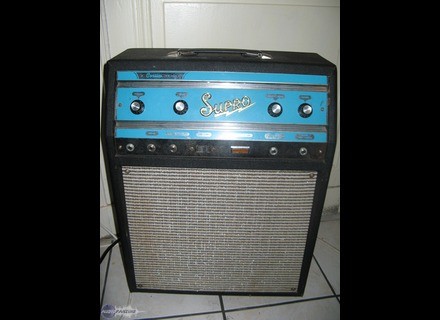 Talibanos's review (This content has been automatically translated from French)

Supro "Corsica" S6622
5
Valco tube amp built in 1963 operated 110 V.
5Y3GT a rectifier,
1 power tube 6V6GT
4 12AX7
HP - Jensen 12 "
In light of the lamp power should be around 15W.
Level connections, everything is in front ie 2 inputs low, an entry "Valco Chicago" with a little more gain and 2 inputs for pedals control the reverb and tremolo.
The amp has a reverb and a tremolo ressord over a volume and tone knob.

Two knobs: one volume and one tone knob.
If the volume is conventional, the tone knob acts both on the pitch and the gain of the amplifier.
In sound is the slap, whatever the type of guitar used (electroacoustic, microphones single or double) it respects the tone of the instrument with a grain of its own.

I use it for blues, rock, garage (with a TS9), reggae as well for the guitar, the harmonica my Fender Rhodes.
I use it mostly with a Start U.S. std, a start reissue 57 'Lindy Fralin equipped, half a crate HOFNER 50s, the blues harp for the harmonica and finally for the registration of Rhodes.
The sound delivered is very typical blues blues rock that is a clear and unmistakable crunch surprising for its size.
The main strength of this amp is his personality that he does not lose depending on the type of instrument played. Mention special effects like reverb tremolo are impeccable precision and can give every song an atmosphere "tarrantinesque".

I use it now for 8 months and I can not do without.
Apart from its look of old toaster I find her a good surprise wherever he goes.
Its only small problem is the abscence of land that tends to send chestnuts in the fingers and the HP limit for power in volts.
Bought at an auction for € 35 I would buy 10 if the opportunity presented itself!
I also playing a Fender Deluxe Reverb 65 'corsica and not be ashamed in front of him! (Power aside of course!)
Regarding the choice to repeat I doubt that happening again any time soon given the scarcity of babies but the answer is YES!
"If bullshit was a tree, the earth would be a forest"

Good sound to you all.
Did you find this review helpful?yesno
»