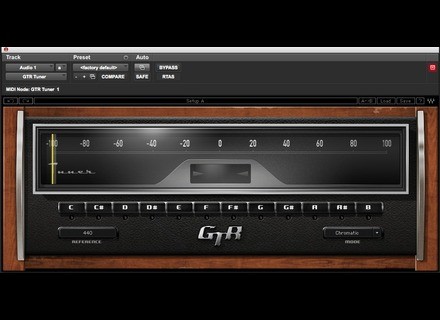 All user reviews for the Waves GTR Tuner

Waves GTR Tuner
4
When it comes to guitars, the number one thing that every guitar must do is be in tune. If a guitar is not in tune, it'll throw your entire mix off. Personally, I'm fairly adamant about perfect tuning and intonation. Well, as perfect as it can be; it's a guitar, after all. Various different software tuners have popped up throughout the years, and the Waves version is among them. It's been around longer than some of them, but it's still a very solid tuner. The tuner itself came with my GTR3 package, and I've used it a few times within the program. It's a chromatic tuner where you can set your reference pitch to nearly anything you need to set it to. It's fairly accurate, although there are some other tuners out there that are quite a bit more accurate.

This is where Waves is the champion. They never drop the ball when it comes to stability. I've never experienced a single mishap or crash while using this software, and I don't expect to. I've been a long time user of Waves, and they never let me down. This is also cross platform compatible. I'm a Mac user, and living in a world that's dominated by Windows users can sometimes be a bit of a drag. Waves caters to both OSes without any issues. There is one issue, however. The GTR3 software is 32 bit software. It's not a huge deal, but OS X is moving towards being fully 64 bit, and I hope they update it before the next OS rolls around and drops 32 bit support all together.

The tuner itself is fine. It tunes your guitars, basses or whatever perfectly fine. However, there are better options out there if you're into the whole software tuning thing. Personally, I like to use pedals to tune my guitars. I find that the Turbo Tuner is one of the most accurate and easiest to use tuners out there. The accuracy is way better than this software. They also make a software version of that very pedal, and it works nicely as well. I just find myself being a bit more of a hardware guy. In short, the tuner is good, but there are better ones out there.
Did you find this review helpful?yesno

Waves GTR Tuner
5
The Waves Ltd. GTR Tuner is a plug-in that part of Waves' GTR series of guitar based plug-ins. I've got the full Waves Complete bundle, so this is included in that as well. I installed it along with the rest of the plug-ins in the bundle as you install everything at once. This is a really basic tuner for guitar or bass, but it will definitely get the job done. It gives you the ability to choose what note you want to tune to in the chromatic scale, but you can also set it for different tunings with the mode parameter and a different reference frequency if you want to tune to something other than A 440. It also has a wavering graph that shows you how far away you are from the pitch in terms of cents. That's everything that's in the interface, so a manual shouldn't be necessary to use this plug-in.

I've got the Waves Ltd. GTR Tuner plug-in running on my home system without any performance issues at all. I run it in Pro Tools LE 8 that I run with a Digi 002R audio interface. I've also got a Mac Book Pro that has a 2.2 Ghz Intel Core 2 Duo processor and 4 GB of RAM to run it all on. I've only ever needed to use the GTR Tuner for brief instances in between takes, so I've never actually had it running while I was recording.

The Waves Ltd. GTR Tuner is definitely an adequate inside the box tuner for guitar and bass guitar. I'll really only use this if I don't have a hardware tuner handy, which is somewhat rare. While this plug-in does the job just fine, I do like the tracking on my hardware tuners better and in general find them easier to use. Having said this, I don't think you'd be able to find too many software tuners out there that are better than this one. You can only get this plug-in in a bundle, so unless you're planning on getting the GTR bundle or Waves Complete, you won't be able to get your hands on this tuner anyway...
Did you find this review helpful?yesno
Cookies help us improve performance, enhance user experience and deliver our services. By using our services, you agree to our use of cookies. Find out more.