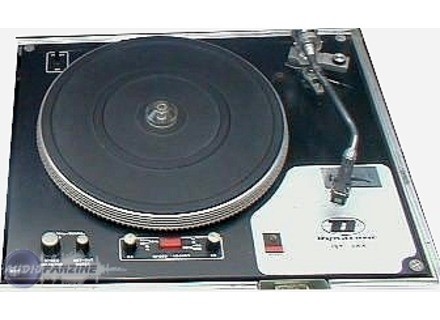 Le Libertin's review (This content has been automatically translated from French)

Dynacord IST 104
I have for 10 years, that is a costal product, it is against couroix training, -78 78 laps all vinyls can be read on the price of the Franks was 10,000 Francs cad 1500 euro deck before the technics MK2 take walk.
Did you find this review helpful?yesno
»

decibelfm's review (This content has been automatically translated from French)

Dynacord IST 104
5
IST 102 and 104, 104R, 204: mythical turntables more intended for commercial radio than for the discotheque market, though many clubs have used it.
This turntable was quite expensive at the time in the 80s (about 6000 Francs, nearly 1000 Euros now).

CHARACTERISTICS:
- Belt drive turntable.
- A motor with a incredible couple, making SL 1200 like gadgets ! You could start the turntable with the arm on the record, uncued, and it took only a few seconds (in fact just the time to get the knob of the console to 0 dB) to get the 100 % speed.
- Fitted with electro start&nbsp; (unlike SL 1200 you have to tweak).
- Forward and backward playing (- + 78 rpm 33 rpm) for cueing the record with a rotary knob: it felt like heaven in those days...
- Fitted with a mass of 5 kg (removable) to avoid feedback due to low frequencies (more likely in clubs than in radio studios)
- The only deck that could play 78 shellacs

Dynacord IST 104 manuals and other files