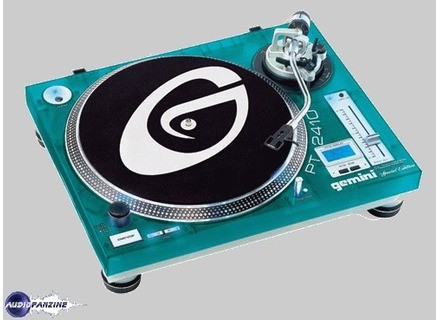 Did you try many other models before getting this one?
For years I had the x2 XL500II was average to good start.
Often to do with Technics MK2 or MK5 reference.

What thing do you like most/least about it?
The more his inimitable style, this limited edition, pitch +10 / -10% are quartz lock and the LCD screen, the reverse is also nice, the possibility of the 78 laps by pressing the 33 and 45 at the same time almost not found on other models. The strobe light blue and is the most beautiful effect, especially when the decks are clear out of their fly.
The facility also spent 110/220V if one starts in a foreign country.
No need to bother with adapters as the technics. The RCA is not changeable quickly as the technics. And there is a real grounding on the power supply jack.

Least, they are hard to find normal is a limited edition but it might be part of more. Personally I have to buy 2x as not found at the same time.
The fact also that the playhead is not actually locked during transport which means that we require is to put the locking head high safety is best able to put a bit of a terminal for transportation. But hey nothing nasty.
Also the fact that there have more space for the power adapter to the 45 laps as the XL500II, but hey we find the buttons revert to the place that is not displeasing.

What is your opinion about the value for the price?
Knowing what you know now, would you make the same choice? ...
Value for money, well it's neither more nor less than the derivative of the PT2400 classic was the most upscale in Gemini at the time. I remember the ad in PA mag was the deck that was beautiful to watch while having MK2 style. The couple is a bit beefier than a classic MK2.
Me at the time I have not hung the drawing and numark vestax.
I think I would do this choice, otherwise it would be for technics, especially for the symbol and legend, but there are some disadvantages compared to technics on it. (Already described)
And that always pleases a rare material (think different).
Did you find this review helpful?yesno
»