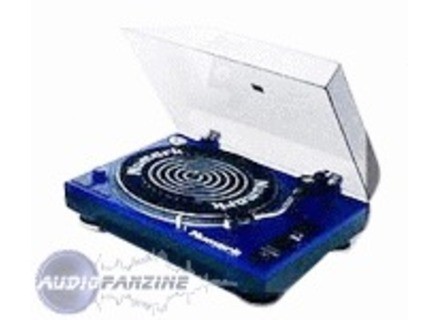 TT1700, Turntable from Numark in the TT series.

Numark TT1700
5
The Numark TT-1700 is a belt drive turntable that I've used simply for listening to records on. We've got one in the studio where I work, but we don't use it for anything other than general vinyl listening. I don't know if the TT-1700 is suitable for any other sort of use, but this review will just be focused on listening with this record player. There aren't really any parameters that aren't standard, as it simply has a 33 and 45 button, for choosing the type of record you're playing, and a pitch adjustment slider, which is for tweaking. The arm is very sturdy, and I'm not sure what kind of stylus (needle), the TT-1700 requires. Overall, this is a very sturdy turntable and should definitely stand the test of time as long as you don't try to do too much with it. It's really a basic turntable, but it sounds great. It's got RCA connections, which is what we've got it hooked up with, although I'm not sure if there are other types of connections to work with as well. We generally listen to some pretty old vinyl with the TT-1700, so I guess it's a good thing to have a modern day record player to play them. I don't believe that Numark makes the TT-1700, but there's definitely nothing wrong with it as far as I can tell. I'm sure that Numark has some newer models with more flexibility, but if you're after a simple record player for listening to vinyl, the TT-1700 does the job just fine. I can't really compare it to any other record players made by Numark, as I haven't used any other made from them. I have a Rotel turntable at home, and even though mine looks a bit cooler than this one, I don't see a thing wrong with the TT-1700.