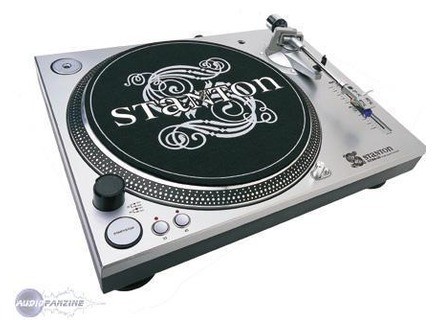 bloodsugar's review (This content has been automatically translated from French)

Stanton Magnetics STR8-50
4
I bought this turntable to scratch me. I paid less than 300 euros (comes with a felt Stanton (effectively, fairly thick), a cell is a cell Stanton "special scratch" Series 500.

I tried a couple Technics / Ortofon: Obviously this is not comparable level recovery disk, but for the price of stanton, nothing to say. It is perfect for running loops or just to mix. To scratch, the belt drive is a fair bit level recovery and the set switches a bit, but it does it very well anyway.

FYI, do not be fooled by the argument merketing "direct drive". Some decks with a belt drive torque will equal if not superior to poor direct drive turntable. So be careful.

To sum up: very good plate for mixing. Good for scratching turntable. First, I found no better value.
Did you find this review helpful?yesno
»

Nigo's review (This content has been automatically translated from French)

So I turned to the stanton str8-50 that was more in my price range.

Since I knew not mix at all, Well I galèrais becaufe belt drive, and weaker than the direct drive.

But after a while I found the right balance between pushing the tray and slow, and I gained some precision thanks to this board, as opposed to those who have started on the decks and even super-known after 10 years of practice can not properly calibrate a disc.

I tried several decks since I started up today and the fact that it is belt-driven does not bother me because I can blend perfectly with today.

With this board we are able to mix and scratch, even if it is not a special deck for scratching because its engine is not powerful enough, it still manages to make the most basic of scratches.

This board is for all who want to start mixing, because it is cheap and can do what he asks.

The cell is strong enough and the pitch +10 / -10 is thus clear from the weakness of the engine is a super player.

If I had the choice again I would do it again.
Did you find this review helpful?yesno
»