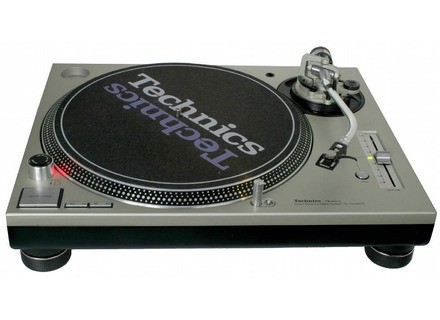 Technics SL-1200 MK5
4
Paid under $500 at Musician's Friend. They don't publish the price because they sell it for less than Technics would like to let people know. I think it was actually closer to $460. I needed a new turntable for some live mixing that I do and the Technics model had all the features I was looking for.


I especially like the quartz direct drive accuracy with continuous pitch adjustment. This helps with some of the most accurate sound reproduction I've heard from a turntable. There's also a very high torque motor for quick startups (only 0.07 seconds stop to speed) and custom brake speed control. Another handy feature for those dimly lit gigs is the LED pop-up work light.
There's many more features that I like, but those are some of my favorites.

Occasional skids. Even with the protection I've experienced this, but it's nothing that really takes away from the unit. I abuse the hell out of it, so I'm sure I had something to do with it and it probably wasn't like that out of the box. In addition, it doesn't happen enough to really complain about it, but hey, you asked!!

First rate. Technics has been making turntables for an eternity and I've never had a problem with construction and quality of their units.

I think for $460 I got quite a deal. I will definitely be checking Musicians Friend regularly when I need good gear. I like to check equipment in my local stores and then go on-line to get the best price. This way, you're able to test it out and play with it and then get it for the best possible price. Nothing's perfect, though, so I don't hand out 5's. This ones a sure 4..

Technics SL-1200 MK5
5
The Technics SL-1200 MK5 is probably the only turntable you will ever need as a DJ or casual vinyl listener. The options and features are stripped down, basic, and to the point. The pitch adjust is spot on and needs hardly any maintenance whatsoever to stay in great shape, and these things are tanks (meaning they can withstand almost anything you throw at them, or anything that may happen to them in the process of ownership and natural wear and tear. The only thing that has begun to break down on my models are the plastic dust covers, which get a little scratched up and have no connector hinges, which makes keeping them connected to the turntable difficult sometimes. They are somewhat fragile and tend to crack and chip if treated roughly. What I really love about this model as compared to the original Technics 1200 model is that the pitch adjust has no notch or lock at 0, which made beatmatching around 0 a real pain in the neck on the older models. Due to the elimination of the locking mechanism, you can now slide around wherever you wish and not have any more beatmatching wavering around the midpoint of the pitch. The pitch lock button, although seemingly pointless, allows the pitch to be locked at 0 no matter where on the pitch adjust you are at the time. As far as DJ's go, the Technics 1200 series are the club standard, so if you get a set of Technics, you can pretty much expect to play on the same equipment in the club. As far as practicing and performance comfort goes, the 1200 MK5 is a great bet to be prepared for live DJing in the club setting. Upgrade the cartridges, add Serato Scratch, or upgrade the cables, and your talking about an even more rock solid DJ tool.
Did you find this review helpful?yesno
»

OK_Corral's review (This content has been automatically translated from French)

Technics SL-1200 MK5
4
Pa gd thing more than the mk2 for a frankly HUGE price. No gde innovation!
Did you find this review helpful?yesno
»

lamouette/rck's review (This content has been automatically translated from French)" Basic, and we only ask that!"

I have tried just about everything except derniéeres vestax, which made me the eye as well.

I trust in Technics. This is the reason for my purchase. Many other turntables are fine, including the Synq ....

For me the value is OK, now we do not find that second-hand (do not buy the nine most expensive)

I do not racheterais because I think what will last me all the time! Bye

Did you find this review helpful?yesno
»
Read the 9 user reviews on the Technics SL-1200 MK5 »