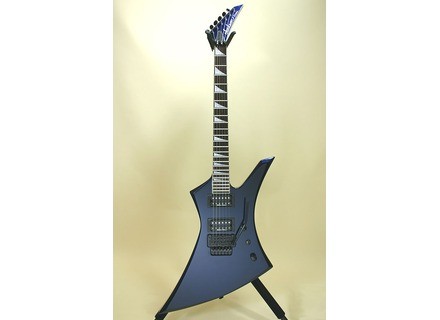 All user reviews for the Jackson Stars Kelly KE1100-J

Hawklord's review (This content has been automatically translated from French)

Jackson Stars Kelly KE1100-J
4
MODEL 2005 SERIES 1100J KE limit (marketing?), Import from Japan thanks Toujou Internet and manufactured in Japan by Star Jackson / Charvel Japan for the Japanese market only.
24 frets, 2 humbucker pickups JacksonStar (remote copy of Duncan)
A bridge Schaller Floyd Rose II 1370 (for the cons is good, it's not the infamous low-end)
One volume, one tone and a 3 position slecteur
Channel crossing by stocky, rosewood fingerboard with shark teeth in the direction of US MODELS (down), basswood body amricain.
Finished in black or blue metal. JacksonStar logo on the head.

Its main Intrets is to have a neck through with a good price Floyd equivalent to Japan's Star Jackson KE-03 (the import KE3 by Fender on our continent) that has the same pickups, but a Bolt an alder body. and a floyd Takeushi.

Thanks to the neck-through, I found almost the same ease to play as the US KE2 Kelly. The feeling is, however diffrent because the keys are in the KE2 bne and finish excellent. In rsum I placed midway between the jap and KE2 KE3 USD for the handle. Access in acute is the highlight of the sleeves through Jackson, no problem for the low E in 24me box.

The ergonomics of the Kelly is an excellent compromise comfort for Aesthetics Shape Explorer guitars. The look is wiser than the KV and WR. No problem to play seated. The body of the KE 1100J was probably the same size as the manufacturing KE2 because I did not see any diffrence in mm prs. As against the handle before the junction with the body seems to me more than the KE2 pais US trs but not noticeable. The finish is correct without more, even in Japan, this DGRAD slightly from the 90s. Nothing to do with that of the US KE2 is exceptional quality when the CONTRL is conspicuously absent.

The pickups are identical in quality to those KE3 do not value the benefit of the handle through. A dry, KE 1100J sounds good and it feels good vibrations transmitted through the body which allows all the hopes with a change of pickups .. Replaced with EMG 81 and 85, is the amlioration Whereas the sound (with real Seymour Duncan, the same rsultat would be obtained in a register diffrent. No miracle when m me, it not my n'gale KE2 also in EMG but it's even a good sound. The more I place halfway between the KE3 and KE2. Because micro base I reduced the rating for all seven. In EMG that would 9.

When choosing Jackson guitars, it's not by chance. Even if they are more versatile than their look suggests, they are facing and Hard metal. With good microphones on KE1100J, you can also fine-tuning the rglages address more traditional styles. Note 6 to the microphone and Jackson Star in EMG 9.

2 months that I play. In fact I play more than the KE2 since I bought it as a liner for the training. She has also exploded a dj, albeit small, at the end of the head (avoid the walls with the heads Jackson). In this role, say anything and troubleshooting, the KE 1100J ensure minimal compared to the US MODEL without galer Obviously. Compared a KE3, its quality is suprieure. Price level, if the KE 1100 J is at the same level as the KE-03 in Japan, imported by an individual in France, the customs taxes and VAT REPRESENTATIVES 25% of the total. She eventually became 30% more expensive than KE3 bought in Germany. But even in this case, the report is largely suprieur quality prices to compensate for the cart. MODEL damage that is not imported into France as a neck-through on a Kelly, that makes the difference.
Did you find this review helpful?yesno
Cookies help us improve performance, enhance user experience and deliver our services. By using our services, you agree to our use of cookies. Find out more.