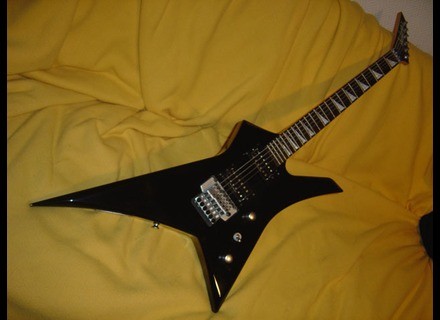 All user reviews for the Jackson KS2 Kelly Star

Average Score:5.0( 5/5 based on 2 reviews )
Audience: Anyone Value For Money : Excellent
Not satisfied with those reviews?
Our members also liked:

Jackson KS2 Kelly Star
5
I own this guitar since mid-2013. It is a bolt-on, reverse headstock, solid black guitar. Alder body, maple neck with rosewood fingerboard. Shark fin inlays. The serial number reads 965****, the output jack plate is oval and on the upper rear "horn" (like on Rhoads), furniture is matte chrome. These three attributes indicate it is KS2 made in Japan, not KSXT, as KSXTs have been produced in Korea, have longer serial numbers, and output jack plates are square and placed on the shorter lower "horn".

I play black metal and death metal with this guitar and it fits in completely. I use Death Metal DM-7, PisdiYauwot, Metal Zone MT-2 distortion pedals alongside with Jackhammer JH-1, Ibanez Tube Screamer, Compressor/sustainer and a noise gate pedals. No racks as my studio is tiny, so I use different combos only.

What are your thoughts on the workmanship, electronics, and finish of this instrument? How is its intonation? Does its neck, touch, feel, shape, etc complement your playing style?

Overall workmanship is decent. The finish on the body compared to Jackson KE2, which I also own, feels somewhat thin and fragile. The guitar came to me with small dings on the horns edges but nothing criminal. I set the guitar with 14-68 strings (B tuning) and it intonates perfectly. After a couple of years, I had to adjust tremolo as it leaned a bit forward. All feels right but the neck which feels a little bit thicker than on KE2.

Do clean, crunchy and distorted sounds adapt well to different microphone positions? Are the guitar's different frequencies and sounds well-balanced? What are the pros and cons of this guitar?

Cons.
- Original tuning pegs could do better.
- Original stock pick-ups Duncan Designed 103n and 103b sound awful. Terrible. Loathful. Guitar squealed like an injured pig with them on board no matter the distortion pedals. The sound was worse than on guitars made in Indonesia. Instantly changed to SD "Black winter" set. And then it finally sounded gorgeous.
- Bad layout (IMO) of the volume control knob makes it harder to play.

Pros
- Tremolo bridge JT580LP fixates incredibly well. I changed all the hardware but the tremolo because of that, now my guitar all black but the bridge.

Not that I use whammy bar so often, but neither I blocked tremolo...
- Owning this babe is one huge pro!

P.S. And no, neither KE2 fits KS2 case nor vice versa!
Did you find this review helpful?yesno

getyourgunns's review (This content has been automatically translated from French)

Jackson KS2 Kelly Star
5
Guitar made in Japan.
24 cases.
Jackson JT580LT locking tremolo licensed under Floyd Rose.
the micro level, two double Duncan Design HB102N side handle and HB103B as an acute.
The handle is screwed, maple, very fine, perfect for the game fluid and very fast.
go to 9 because of the floyd, which could have been better now, although already very good.

This is my third guitar, and I find it amazing, the handle is very nice, access to acute simplistic, but what I like most about this guitar is its look, it really has class, I bought it because I wanted a form has a simmilaire wahsburn as the late Mr. dimebag Darell, the weight is reasonable, and the sound of the pickups are very interested, although predisposed to fat saturation, I jou all over, and I find it rather versatile.

I jou in all styles of music, especially funk and metal. or groove metal like pantera, and I find it perfect for use as I did.

I use it for the past 7 years, I paid something like about 1000 euros lépoque the RAPORT qualittée exelente price is a very good guitar, one that fills me most at the moment. With experience and no doubt I reffer this choice.