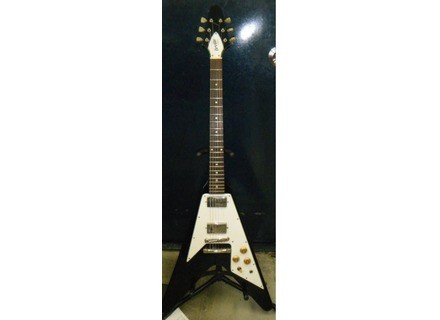 Orville Flying V
5
There are several types of Orville Flying V, between the models 67 (rare in France) and 58 (even rarer), but also the manufacturing, Terada (the most common) and Fujigen Gakki. My model is a Fujigen Gakki, varnish vintage banged up and was apparently equipped with a gold Vibrola acastillage. It is apparently rare, I have only found a few identical models pictured on google.

The C-shaped handle my Fujigen is atypical, far profiles D flat (or very flat) of Gibson Flying V current. He could recall the handles of Epiphone models of the 90&#39;s years. A very nice profile, feeling "baseball bat". Those who play on Music Man or 70s strats understand. It&#39;s very nice, especially with the thumb on top. The Vibrola was disassembled for a better grip agree, and I must say that the mechanical origin do a very good job. Stroke of luck, because that was not the case on my other Orville or Burny.

This guitar is also remarkable for its construction: the handle is shifted upwards, and therefore the key higher relative to the body, providing high sound projection of the instrument, as far as my copy of Les Paul Florentine , a half box. It does not solve the limits of sustain, suitable for all Flying V, but it gives her the dynamics of the body even in crunch or clean, with lots of bass.

The rest is comfort Flying V. No itchy head with my model, but we must get used to the comfort of playing with the lack of support for the forearm (it is surprising at first) . You can always jack stuck in his belt (to prevent it from being lifted) but it is very unsightly. At last but not least, we had a nice tool to maneuver, so be careful not to stick it to blow hot reproducing Scorpions or Randy Rhoads in his office or in his room.

What surprises with this guitar is the width of the sound spectrum. If you have less sustain than a Les Paul, we have a more open sound like the SG, while retaining much of the body. We forget, but it&#39;s really a sacred guitar for blues. It did not happen once I kind of case without subjecting it to a small Baby Please Do not Go.&#39;s Original pickups are not great. They do the minimum taf (saved by the resonance of the instrument), with its sometimes accurate, and fairly sharp treble to double. It surprises at first, but it looks close enough to render P90, and when one is in classic rock or blues, it&#39;s very nice. I left "stock" because it is the one that best matches at my head with Marshall YJM for vintage sounds.

It does not have the performance of a Les Paul, or SG, is another guitar. The limit may be compared to another "modern" Explorer. It gives me a kind of intermediary between SG and LP, in terms of body and power, I understand that a lot of guitarists have adopted the Heavy, it is less and more accurate thanks to the big saturax that a Les Paul, with more body and less "twang" than a SG. Gibson&#39;s own, this little trick is kept biting when you do vibrato on a double bend.

In short, it&#39;s not a guitar jazz or funk, it&#39;s a lead guitar, you do blues or hard. Although not a fan of SH4, I think it should perfectly suit this guitar, as Classic 57 elsewhere. I&#39;m not a metalhead, but I think with the acoustics of the instrument, very rich, mounting kit EMG could be explosive, and offer amazing clean tones, filling the entire spectrum with power. Mounting a piezo would also I think particularly compelling about this guitar.

I put 7 because the potential is there, you just change the mic.

Unconvinced by the Gibson Flying V current (mainly medium and very fragile faded really), I had gone to buy a Epiphone 90s or one of 58 current Korina who seemed better than their big American sisters. In the end, I came across this Orville, by chance. I hesitated because it was not the budget I was planning to put in a second guitar (I play on Music Man and Telecaster mostly), but the profile of the handle has cracked me. I hate the ultra-flat and wide sleeves of current productions, and then I had a handle that I like, ergonomic, with just enough roundness to fit the palm of the hand without being thick, allowing fast game. We go all over: Plan tapping as big bluesy bend without fatiguing remaining compulsorily academic position.

Next, we must also take the look, it does not pass unnoticed with Flying V. So if in addition it is a rare model, a little relic patina of time, it gives you the look of a fighter rock out of a 70&#39;s attic.

A very good guitar that deserves a change of pickups, and whose handle will be appreciated by all body hand. If the playability of the present Flying V gives you trouble, it&#39;s a great alternative.

Orville Flying V
4
Flying V 89 output Terada factory, the first model of the Reference Series FV 74. The config is simple is a Flying everything is more normal with two micro Gibson PAT 2 ....( 490 actually), two volumes, one tone, one three position selector, tune o matic bridge built by Gotho, the knobs are made in japan.le body and mahogany neck, the rosewood fingerboard.

a word about what this says about Orville and Orville by Gibson other. the only difference is the microphones placed on the guitar and sometimes the nitro lacquer and polyurethane for OBG for Orville, (although I already had a hands Orville SG with a nitro lacquer ..!!!. ). nothing else. everything else as the best wood, complete electronic gibson, the best finish, etc ... it is pure speculation, nothing obvious when we had several models in the hands of the two "brands". They were manufactured in the same factories (Terada Fugigen or after 92) with the same tools, by the same people.
Mij ​​is the microphones of Orville have fewer characters in my opinion that the Gibson pickups. 3 types of microphones were installed on the OBG, the PAT 2 ... (490), the classic 57 and Bill Lawrence. Orville wiring also seems more cheap but mainly due to an impression of micro cables are not shielded like the gibson, and sometimes using different pot.
as a legend "If there is a K to the S / N it comes from Korea," it's just that it is a command Yamano (Kuramae) to that manufactured by Terada anyway.
At that time the price difference between OBG and cousin Orville was in the range of 20/25%.
Note that the high-end OBG and Orville, there are models with ebony fingerboard LP (referenced in the catalog 92), but personal, I've never seen!

The guitar is very light, really ... more than a SG to locate. at first it still a bit surprising.
the junction body / neck is medium long tenon type.
when one inspects the beast, the welds are made, the assembly is serious, no sputter after 30 years of service, everything works nickel.
We like it or not the form, but it leaves no one indifferent.

the handle is nice, I like the typical 60.
access to acute ... well it is hard to make it more accessible, there is no gene ...
The shape is very nice upright sitting to play but, frankly, there's more comfortable.
I am not a fan of the config 2 volumes, one tone, but hey ... it's standard on this machine so it can be done.
despite the mechanical vintage, the tuning is good.
for audio, see below ....

Then the sound?? what about this old Japanese that everyone touts and argues that some are better than gibson pure juice from the same period, etc. .. etc. .. etc. ...
Well, some may be, but not this one.
Let me explain.
The guitar is very resonant vacuum, very resonant, no problem the above, we feel the wood vibrate under the blows of pick.
Once connected I have a little disappointed.
its clear, it is sorely lacking in tone, the lack of relief, too large for my taste, you might say that V is not made for that, of course .... of course .... does, it is expected mieux.ou rather, I expected more.

In crunch and overdrive for cons, it's all good, it sounds very vintage, the output level is not great but the grain is very nice for those who love period kravitz "are you gonna go my way" it does it well.
against by some sustain, personal, I boost the sound with a compressor to give some relief to the beast.
In fact, it is mainly the lack of sustain bothers me a bit.

I used it for almost a year. and tired of never totally satisfied with the sound that I was leaving, I ended up selling it.
not a bad guitar, far away, even for the very nice punchy rock, but it did not bring much to my guitar set aside the looks that I find very sham and I liked a lot.
if you find it for around € 400/500, it can be a good deal, beyond that, let go of the case, a faded gibs will do the job as well even if the finish is not quite the same level must be said.
Did you find this review helpful?yesno
»