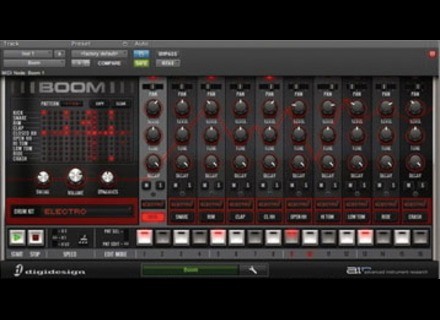 Avid Boom!
4
Avid's Boom! is the free virtual drum machine that comes with Pro Tools 8 and newer versions of the industry standard software. It's somewhat limited in it's scope, especially when compared to other virtual drum machines like Native Instruments' Battery. However, considering it comes free with Pro Tools, it's nice to have and is fine for laying down simple beats. Boom should install when you install Pro Tools, however I had some problems getting it to work for a while and only recently did it start working for me. For whatever reason, when I first got Pro Tools LE 8, this and a few of the other newly added virtual instruments were missing. It was only until I did a full reinstall of Pro Tools 9 that it started working. I'd used it a bit here and there on other systems, but I'm glad to now have it at home. Once it's up and loaded, learning to use it is very simple. It doesn't get much easier than this in terms of a virtual drum machine, as it gives you ten drum kits to choose from and a series of 16 beats to set where you'd like each element of the kit (kick, snare, etc) to hit. Unfortunately, you can't import your own drum sounds into this, which is the major thing that Boom is lacking. You also can't really send this out to a MIDI track as you either need to do it manually or recording it as audio. In these respects, Boom is somewhat primitive, but again for a free instrument that comes stock with Pro Tools, I can't complain too much. I haven't checked it out myself, but I'm sure there is some information on it in the Pro Tools manual.

I'm currently running Avid's Boom! on my home system which runs on a Mac Book Pro laptop. The computer has a 2.2 Ghz Intel Core 2 Duo processor and 4 GB of RAM while I've got the newest version of Pro Tools running, Pro Tools 9. Pro Tools 8 and later versions will come with Boom, so if you have Pro Tools already, you'll have this running in it.

Avid's Boom! is a nice little drum machine to have as a stock instrument in Pro Tools. One of the main draws to the newer versions of Pro Tools are these virtual instruments like Boom, which actually sounds pretty good and are very useful to have, especially if you're just building your DAW and might not have any other virtual instruments. Boom! is nice for simple beats and ideas, but it's definitely limited in what it can do since you've only get 10 preset kits to choose from and can't export it to MIDI. It would be very nice to have these features, but maybe the thinking is that you won't pick up the more in depth virtual drum machines if you have that. Either way, for Pro Tools users, Boom! is definitely nice to have and deifnitely worth messing with if you don't have any other in the box drum machine.