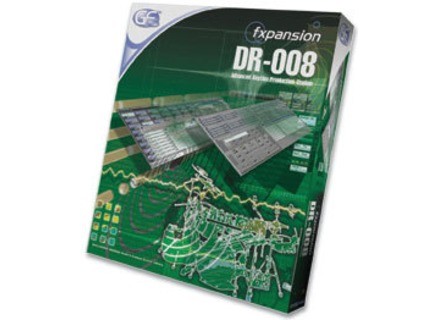 All user reviews for the Fxpansion DR-008

Fxpansion DR-008
5
Warning: This is a notice to hot: I just found the Bouzin. Update as soon as I went further.

No problem to install: comes with Sonar, he kindly installed the software without making a fuss.

Configuration fingers in ze nose with one exception: I have not caught on how to get the aux sends. M'enfin in 1 hour without opening the doc ...

No stability problem in any case.

This is a test a few hours. I had not had time to immerse myself in this virtual instrument comes with Sonar. I just did and I am baba.

This stuff is super intuitive and yet very powerful. We are in the reign of the drag / drop and right-click + contextual menu.

Wherever delirium is that each note (represented by a small box) can be "filled" with different things to choose from:
- A preset (or: those provided more than adequate and many are very good)
- A sample stupid
- A 4-layer sampler
- A dynamic sampler (not tested)
- A synthesis module drums
- Not a sequencer 12 x 8 sounds (to play the corresponding note then triggers the sequence)
- 4 modules to stuff delusions or sharp enough.
For example we can start by playing the note containing the module, up to 4 other "notes" mapping a set percentage of the volume and delay. For example, one can play with a score of 4 parts kit + / - strong and with + / - of delay.
Another example of a module: a configurable autoroll.

We change all that by animals drag / drop or right click + contextual menu.

The interface has (apart from the settings) 4 windows clear:
- A general assignment for notes + air + pan
- A mix (with faders)
- An "edit" with display settings of each sound module or whatever
- A detailed with ... more details

All this in a simple to fall. This means that not only have fun with this thing soon, but I think it's a real boost creativity.

The only risk is to forget the time!

I have not really paid that stuff was part of the package as Sonar, but at 155 euros at the end, I think it's worth much instantly.

Another very important point: the display is very clear. Everything is easily visible and not tiring for the eyes. And the interface responds very well to the slightest movement of the mouse. You move a fader: the figure appears to release the mouse.
Despite the small size of some faders (which displays a lot of things simultaneously), it is very easy to stop at a precise figure.