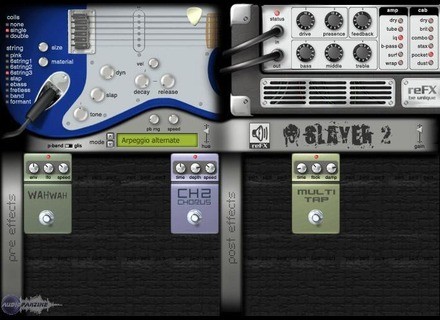 Pyer123456789's review (This content has been automatically translated from French)

reFX Slayer 2
4
Installation without any problems.

I use it for almost 6 months, I used the first version, this software has everything I loved in the first version sounds beautiful and powerful, forget the clean sounds, maybe to play the synthesizer, they are very beautiful but unrealistic.
Being a guitarist, I can blame the software, as it does not very well assimilate the playing techniques, but that said, every player has his style , the rhythm is big metal distortion, it exelles in the PowerCore, the visualization of the pedals is nice! presets, many more than in the first, are very interesting! There is among others a retrospective of the sounds from 1960 to today, it is interesting to note as the sounds have changed, even between 1990 and 2000! A minor complaint, presets signature is mainly slipknot, manson and others- system of a down ... this software should address it as teenage in crisis?!?
Did you find this review helpful?yesno
»

Furykane's review (This content has been automatically translated from French)

reFX Slayer 2
4
Software piloted in midi in cubase as a virtual instrument.

No bug in mac.
Effects can be used separately.
Distortions sounds acceptable (though remains synthtique)
Clear and clean sound: forget it

A bit expensive for this plug but at the same time there is no real competition in this price range.
Did you find this review helpful?yesno
»