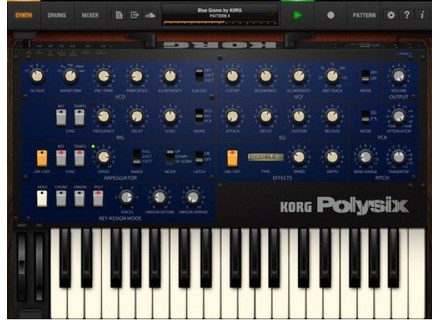 Korg iPolysix
5
"I hear you're buying a synthesizer and an arpeggiator and are throwing your computer out the window because you want to make something real!"

So goes the line in James Murphy's disco rant on LCD Soundsystem's first album. Ironically in an age where so much technology is literally at our fingertips, in the form of iPads and smartphones alike, there is an ever-mounting interest in what it means to be analogue. For the general music consumer, the rebirth of vinyl records is an obvious example. For the recording musician, the renewed enthusiasm for 80s era synths since the turn of the century has mounted to a frenzy of musicians scouring garage sales, pawn shops and online auctions all trying to find that one forgotten, unique, but synthetic, yet analog tone.

As a result, a few classics of the era have become studio mainstays and are preserved much in the same way fabled compressors and rack-mounted gear are preserved. But much like rack-mounted gear, the size, weight and maintenance of such equipment is a major constraint for the project studio owner or the mobile music professional. With this is in mind, developers have done much in the way of creating virtual instruments as plugins, much in the same way they developed plugins for emulating rack-mounted signal processors. In both instances, the hands-on tactility of the original components is what is ultimately lost. However, virtual instruments for the iPad is a whole new ball game, offering an interesting mix of both the plugin and the hardware.

As someone who has tested Korg's iMS-20 app and Moog's Animoog app, I have become quite fond of their new iPolysix, the virtual reincarnation of their fabled Polysix synthesizer from the early 80s. This is primarily because of its simplicity. It is a lot less like owning an "all-in-one" synth emulation app and more like owning a singular analog instrument. In essence, the extent of this app's features are no more than those physically available on the original instrument itself. Given it's hearty $40 price tag in terms of the app market, this may be a turn-off for the feature-obsessed consumer, but for the purist looking for a singular, competent analog piece, this is its greatest point of attraction. Because the development of this app was dedicated to the faithful recreation of one singular, sought after piece of equipment, its authenticity can rival that of its original, analogue counterpart. That means in the hands of an artist, all of it's original constraints and idiosyncrasies work together with the creative process to make sounds using the app the same way one would with the analog piece.

This also means that if the sound the artist was after couldn't be accomplished with the instrument on its own, that it could be integrated with other studio equipment to achieve the desired effect. This is where I most love this app. I fire it up and my iPad transforms into an analog synth. I can then use it's interface just as I would the original unit and integrate directly into my studio as another instrument. In the example composition I have provided, I recorded two tracks into pro tools, routing from the headphone output of the iPad through a Palmer DAACAPO impedence converter and through a chain of guitar effects pedals. The results is a composite tone that has resulted not from the iPolysix on it's own, but as an integrated, physical piece of hardware in my studio.

The beauty of the iPolysix being a virtual synth outside of the box is that you get all of the ease of presets, zero-maintenance and minuscule physical footprint with all of the creative possibilities of integrating it physically with the other elements of your studio. If you're already an iPad owner and you consider the use of this app more like an outboard piece of gear, then the $40 price tag for a classic analogue synth is pretty incredible.

Pros
+out of the box integration
+authentic recreation of the original hardware
+authentic, analog tone
+ease of use, maintenance and portability
+midi in/out wirelessly via Wifi, for direct integration into Pro Tools or Ableton

Cons
-most purists will still want to use a high-end midi controller in place of the touch-screen keys, which defeats the small footprint
-more of an iPad con, but the headphone output has low stereo output
-perhaps the lack of features and varying synth tones will be a turn-off for those in search of a more flexible app
Did you find this review helpful?yesno
»

Published on 11/27/12
Korg has unveiled the new iPolysix app designed to evoke Korg's analog polyphonic synthesizer while making use of the iPad interface.

View all 11 videos of Korg iPolysix »