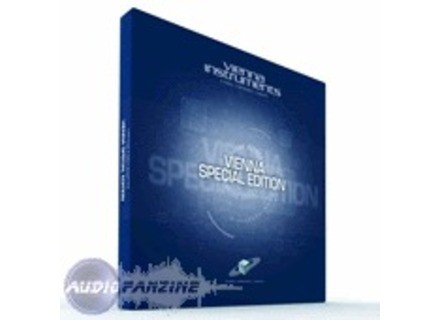 I5 CORE + 4GB (insufficient in terms of memory.)
either vista or win7 it turns like a clock

several years and I'm tired, because too few and surpassed by the competition.
the violins are dropped and extremely difficult to make credible
(Placement in the concert hall, vienna impossible without the "MIR")
No Round Robin!! Argh! it's cruel! So stacatto effect on gun ... it says must proceed to checkout for elimininer this problem with their new engine "pro" and complete with banks from the "cube"
Now to € 5,000 for something that is pro moron.
It has to compete with orchestral Eastwest Silver C ALL!
for the must should be taken HOLLYWOOD (string + Brass) + Symphobia banks and add the orchestra often better!
will see in cinesample, westgate also ...
VSL is torpedoed by all these people ... cheaper and better!
I will not make this choice because of the crazy prices (their latest product is good but too expensive) but "epicHorn" and some instruments to "download"

I use the same type of product for 4 months and the samples are great but not good there to eat and drink in the art of making instruments sound!

Features I like least:
The fltes are Nules and some wood (eg clarinet). Explanation: you do not feel the breath of the musician, the instrument mcanisme derrire and vibrato in the case of fltes.Le piano is zero, I prfre that of Steinberg and then it does not matter too much, it is better to take a numrique!

Good point: some samples are gigantic prsence. For example, all sets of strings, the string chamber. For brass, no question of making brass jazzouille! they are still brass orchestra and some are inflating the console.

Conclusion: I who habitu silent through the technique of sample E-MU 2 / 3, the margin of quality and thickness of sample is still working for the technicians who take the tune with these samples of Vienna . Therefore, if all samples had the quality of the sound recording of GForce M-Tron, I say ok!

Given the price lev Reserved for large studios if they have a minimum of derrire classical culture, such as: how the guy plays the bassoon and the connatre Difference between a horns and a bass trombone.

In short, the great intrt the trick is to arrange or deal with small groups and not so much to compose a symphony virtual because for this, the wallet in ralisations studio by far outnumbered in the box , so taking a sound quality homogne s'avre indispensable.

frédéric91160's review (This content has been automatically translated from French)

VSL (Vienna Symphonic Library) Special Edition
5
The installation is rather long (about 60GB) but no problem, however, no incompatibility must be to obtain the license DEFINITIONS have the USB dongle 19 euros.Le trs ergonomic software and manual fine n 'be in German and English, found her again soon. The software is easy to use.

I possde a motherboard ASUS A8N-SLI, an AMD 64x2 6000 +, 4GB PC6400 RAM, hard disk sata 580go 7200tr and a sound card m-audio delta 192. PC ncessite an update as I accumulate more and more plug-ins that require a lot of resources but what his last! The vienna edition spcial much in demand, but ensured vsl APRS have composed your part, you let your squenceur of play and a window called Performance of support you learn, the software will vienna analyze samples and APRS have utiliss press optimize it that they keep. A real treat for those who have no money to buy a Mac G5 quad with 4GB ram.On can easily stack multiple instruments provided they do not go on the rear part consists. It's true that the piano sounds bad, the flute is not ecstasy, but compared to other kinds of plugs not envy. But if we take the vienna is mostly for strings, the plug is close trs. The comcepteurs opts to have a raw sound with no reverb trs. The goal is not to make our lives easier. The goal is to have a dry sound that requires more work, but mixing that can shape the sound will. It is not about cooking but I take my head prfre the mix rather than the ease of choosing other plug insrer be in a mix. To see if eastwest now with its new player has come to do better by giving more substance to his instruments.

I use it for a week, and what I like most is the ease with controllers and pitch modulation to change articulations and feel like having a vritable orchestra. The least count is the price 850 euros for the extended version that sounds possde supplmentaires INTERESTED see as indispensable chamber strings that are exeptional and appasionnatas strings (which are the donns that with stustain and joints, but as spiccato Integrates brilliantly in all types of music pop, rock, rap, rnb, trip-hop, it is best to buy the standart version of these in addition to spcial standart edition rather than acqurir extended version of the spcial) The saxophones thus become the only Intrets the extended version but given the extra cost to buy tools yellow saxophone that makes more sense dchire . Good report quality price exeptionnel when compared to other products of the same gender, I tried Edirol Orchestral, EastWest QL, Garritan, Synful orchestra and it does not really make the weight in the game ism and sonorits.Je Refer this choice without hsiter c'tait again if this is the best plug in the world and all its competitors down hardware and software.
Did you find this review helpful?yesno
»

vanpopoff's review (This content has been automatically translated from French)

Stable, but my god heavy c

I think that there is no better set of plug for the violins, what I was looking for any evidence! For other sounds Sounds very good too, but be careful using this plug requires a lot of work editing.
Did you find this review helpful?yesno
»
Read the 6 user reviews on the VSL (Vienna Symphonic Library) Special Edition »

Published on 03/10/11
Vienna introduces price drops on all of their Vienna Special Edition DVD and Download Collections.