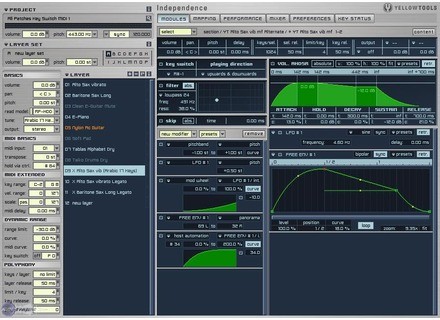 Yellow Tools Independence Pro 2.x
5
In fact, for starters, I confess that I really hesitated when I saw the notice ... and at the same time, they did not wrong! I purchased the software only for its bank, which is almost equivalent to Komplete and that is really cheaper.

So here I'm working on i5 in 2500 with 16 gb of ram, everything works nickel ... but beware, I use ENGINE! The sample comes with its bank is quite useless, I had the same problem as other with peak CPU and even worse ... big crash! I send tons of mails at the beginning, because the product disables all alone after my 3 license ... I could not activate it .. I was 6 months but can not use ...

And MAGIC! They are bought by magix! I send a mail in less than 4 hours each time I have a reply, get detailed, accurate and always solution that works to complicate.

I admit at first I was afraid of losing money, but since it was redeemed by magix, way too much. With engine I have ever no crash, and the app does not switch off after a while ...

I also had to reformat my computer some time vela ... my license was taken 3 so I sent an email ... no messing around after 15 minutes the problem was resolved, VERY responsive! THANK MAGIX!

So here, the sound bank is simply staggering! To ring his ring. I also bank on its Komplete element (the first one, go with 12) and seriously I could not say which I prefer in terms of sound quality. The only difference I could find is that Komplete has typed his much more ... in yellow tools is not the case! on the other hand, it has effects for typed a little more ... very very well.

So in terms of value for money ... this is number one, but only because I was lucky. If it was not Magix ... My advice would be much worse and surely I would also say that this is a escrocrit!

Yellow Tools Independence Pro 2.x
2
For specifications, see test site builder and performs here in Audiofanzine.
The installation is not very complicated but not very simple, we need to understand what the root directory. I performed the upgrade to version 2.1 and you have to know or the components are installed (FX, dll etc ...). In short, it's not plug and play but close.

Bank's rating, it's basically the same very large I would say, apart from perhaps the pianos that are pitiful, the quality is really very good. It receives the candy DEDICATED libraries, culture and majestic that are breathtaking.

The FX are excellent provided and used independently. I thought I felt a delay in their jobs, but I was mistaken. In short, the very good FX with a convolution reverb and more.

Now turn to the problem because it is no less. By rotating the standalone app, no problem. By turning it in cubase, streaming is completely rotten. Virtually unusable. 10 passes the voice streaming, like a chord on strings and it is eaten peak CPU and therefore continuous clicks (in practice a click at each loading of streaming). So using sound note for note, it goes but that's it. My config is not the newest (3GHz P4), but still above the specifications required by YT. Really unacceptable. Can I use Halion with big banks with no problem, so it's not a problem for PC. I complained and they invest YT has the problem, I hope it will be resolved in the next update.

YT support is not great, when I complained, saying that Halion worked fine, I received responses like: Oh no, independence is better than Halion, streaming is superior. It's been really advance the shmilblik ... Brief marketing blabla because I dare say that I no problem on Halion unlike Independence. Eral after having the forum, I finally received a sensible answer and I have provided screenshots for them to work on stuff.

I gave the note 3, because the bank is superb and a little fiddling, more or less usable - the sounds that can be played note by note are good (guitar, bass, sax etc. ...), for keyboard sounds, I already provided.

Edit 07/09/2009:
After 6 months of waiting, the new version has arrived -> it pays off. YT does not care of the mouth of the world. Their support is simply outrageous. After many broken promises on the date of this update, it is finally paid, and it has biensure our own risk (we're not sure it will fix anything). In short, more confidence in this box Suck. Avoid buying any products YT, they are con artists who let you go if you have any problems. I lowered my rating accordingly.

I received this software in a blackjack promotion of "two for the price of a" best in service, I took it to the bank only, as I have already a very good sampler super stable Halion. So I'm more or less content. If I had to pay for this ....., I would have done a trial YT. In short, if you can receive free, not bad. If you want to buy it, at least with a config like mine, avoid like the plague. Now it may be tougher than a config, it will run nickel, has to see you.

Yellow Tools Independence Pro 2.x
1
The installation method is complicated: install several times, does not find his way (he basoin a ROOT directory), validation on the net from the user account, Out Procedures that do not work under IE9, and in IE8, it conceited confirm by pressing "Enter" the figures before revalidate the mouse: I even install Firefox to look, same problem.
I ordered the version "download", and when I saw that there were 70 GB downloads, I demand version Box Answers to type vatefaire.
The download of the 16 bookcase is laborious, 4 bookcase re loader, with the fear of the obstacle course in the windows "user area" of site.Pas manual, d "I also do not see what we can really change.

PC MATERIEL.NET MONTE
ASUS motherboard P7P55D
I5 750 Intel Core Core Speed 3000.0 MHz
8192 MBytes RAM DDR3 G Skill F3-12800CL9-2GBRL
Radeon HD 5870 X 2 in SLI
10000 600 GIGA VELOCIRAPTOR TOURS
F3 + 2 Samsung Spinpoint S-ATA - 1000 GB
POWER 750 WATTS
MOTU 828 MK2 SOUND CARD: Config solid.
I happened to have an inexplicable Manir dsaccord in frquence (pitch) Yellow Tools. Crashes in Stand Alone. The installation is manual, and sounds are classs in the browser other than what what we saw in s'atttendait manual classification. Too many perceived (Brothers Bloom), good brass sections, audio means, poor interface: we act on some parameters. I saw no trace of Independence Fx, that is described in the package. This software comes crashing Reaper and Cubase, when I'm running for example Cubase Halion + multilayers with large, + the good with Kontact Multi pianos without an eyebrow hair does Exceeds (6 GB of "load" ).

I dare not use it as my dception is great. I catch up to me the equivalent of Komplete 7, Halion Sonic, all apps ASA 4True Pianos.
I think the FREE version, simply: when the default is the same.
In this world nothing is perfect. Yellow Tools Exceeds But what is commercially dcent see legally.
Do not, do not be evil.
Sincerely

sonicsnap's review (This content has been automatically translated from French)" This is robbery! Do not buy!"

Yellow Tools Independence Pro 2.x
1
Extreme Activation is difficult. The site is a maze with no name. Online support is not responding. I finally managed to activate a miracle, I do not know how to saw the head and taking the number of unsuccessful attempts.
But does not activate at all. When we launch the product, it must also indicate where the file "Yellow Tools Root Folder". This folder does exist, but the search does not recognize. Result: Unable to launch the product.
Despite a detailed description of the problem and English, online support is still not responding.

Obviously, anything that works for Yellow Tools is collection of credit cards.
THIS COMPANY IS A CROOK. DO NOT BUY THEIR PRODUCTS.