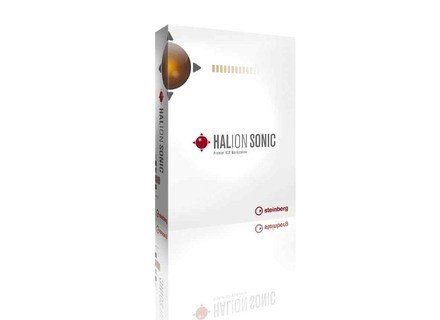 Steinberg HALion Sonic
4
Steinberg Halion Sonic is affordable and runs at a high level. It installs quickly and does not take up much disk space. You can also run other programs on your computer at the same time because it does not take up much CPU. It comes with a tone of sounds and patterns and you can even integrate it with Cubase 5 very easily. That was one of the key decisions for me because I use Cubase a lot.

The layout of Sonic is easy to work with, it makes everything faster because it seems like all the options are right in front of you on the main screen. You will have infinite possibilities to edit and shape your sounds in this program because it gives you all of the parameters, and you can even tweak those using a MIDI controller or keyboard.

You will get over a thousand different instrument sounds with this program and a ton of effects to use with those sounds. Now not all of the effects are that great, but they are useable and better than a lot of effects that come standard with most DAW’s. You can use this software on a Mac or a PC, you will need to have at least 2 GB of RAM, if you have that much you will be fine and it will run great.
Another thing to take note is that the activation process can get daunting because you need to have internet connections to do proper activation. For me that was an issue because my studio computer has no internet connectivity (on purpose) to keep all viruses and malware away from it. I thought I would be able to activate right out of the box but boy was I wrong. It was a headache trying to get it activated online but we figured it out. It does also require an eLicenser key and that is not included

Steinberg HALion Sonic
1
No problem with the installation. He did not miss it!

Running on I7 960, no problem.
The interface is absolutely not functional, not well thought out at all. Instead of facilitating the handling by users, programmers have preferred to force it to comply with the requirements of their product. Thus, if the selection window of the program is opened, it is the only active, it is impossible, for example, start playing your movie. You must select the program, close the window, start playback, open the "Programs" window if you want to try a different sound, and so on. This is the only VSTI in my possession which requires to do this! In addition, if you select a sound category (Low, for example), this category is selected when you reopen the program window, we must remember what category was part of the selected sound! It's great no matter what!

And then, it would be secondary if the sounds were grandiose, but it must be noted that these are sounds heard 2000 times, very average and give your character a compound "midi" worthy 80s. Extremely disappointing!
There are just a few sounds (not very original) that stand out. But they do not save the whole.

I use it for several years and in fact, almost every time I wanted to drag a component, I ended up preferring another VSTI him as Kore 2 Native Instruments eg offering much more diversified banks and more interesting sounds.
I highly recommend purchasing it, do not waste your money, go your way!

The important thing is the music, and there ... Not good at all.

Chichi's review (This content has been automatically translated from French)" Well .. but ..."

Steinberg HALion Sonic
4
when you're used to steinberg, one must know that you need a key e-LICENSE.
When you're on Logic, it says nowhere and nobody tells you!
Then he must learn to use E-LICENSE. I just want to make music!
Steinberg after having the phone, I managed to get the license key
I did the update to 1.5 and then downloaded the bank triebwerk ... and once again for the license.
(We would prsque happy to find a cracked version of the same by paying steinberg)

I use it in my studio on Imac i3 4GB RAM with Logic
and on stage on my laptop i3 standalone.
On stage, it is stable once found the right latency settings
(There is a method or app is doing and it works perfectly).

in the studio, it is much less stable
Sync flexphrases of plant regularly and notes block when
returns to the beginning of the song.
It is pretty crappy but I need it!

6 months that I use, I toured the functions of the beast:
it is quite powerful, with a great choice of flexphrases to mount quickly moods, grooves. Electronic sounds sound great.
on the other hand, it lacks a lot of acoustic sounds no bank is proposed.
(No ethnic instruments, some wind instruments)
Some sounds that plague the CPU (hybrid strings).
I bought it to prepare a musical, driven by a CS6x.
in the pub, they say you can call 128 patches. This is true, but what they do not say is that you can just load the previous or next patch!
therefore no question of sending the PG 34 and have immediately changed his groove split / ep + strings.
We can fuck the system by preparing a multi 16canaux and send out on 16 different channels ...

this is a good software in general, may be a little young but that sounds
really good.
I wait without much illusion a universal bank type "studio" or "ethnic"

and experience with the same budget, I would have no choice and I would buy halion Sonic.

The important thing is talent!
Did you find this review helpful?yesno
»

Steinberg HALion Sonic
5
Installation nickel.
I dig it not a priori that people have against E-license or Ilok, I
I have both and zero problems.
no conflict on my system in win7 64bit
Manual? I never opened more then if we know hypersonic 1 / 2 is the same philosophy.

config minister, i7 960 quad core, 24 GB, config climbing KOMPLETE 7 and MachFive 3, hollywood Striga / brass
over-armed for this app not so greedy as that.
bah so it would be if mouline fortunately a lizard's.

I just bought it, the purpose and use it as a multitimbral sound module for the fast component and its a hit, then I reworked on machvive / KOMPLETE.
I was surprised to read posts or advice you still have not abused.
of it is far from being worse than even the cakewalk dimension pro that I have with her is much more crude and metal and it has no more no more multitimbral layers and effects do not pourraves comparison to a more expensive product.
This little app is very musical as well as a sound module or even more I have owned almost everything hard in recent years and is well worth a motif xs / xr phantom / triton without problems so it is in this niche that is positioned.
those who want to start a small config this even on portable may well have fun without selling a kidney.
Reason comparison with both me laugh even if it's a good product it is certainly not the quality of sound sonic halion, except with banks to be little additional time but not the same budget.
for the other off course the soft luxury surpasses but not necessarily in all, not even when the same budget (8 KOMPLETE ultimate Becane 995.00 and a 2000).
is therefore necessary to put things in their place produced excellent value for money, not even the 239.00 Euro price OCCAZ a jv-1080 completely to pick a side and it runs on most small bike in in asio4all .. ... a meditation.

Did you find this review helpful?yesno
»
Read the 5 user reviews on the Steinberg HALion Sonic »

Listen to the 12 audio files about Steinberg HALion Sonic »