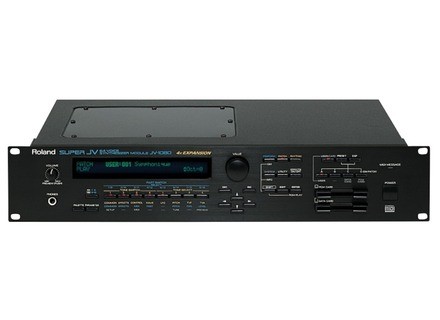 In much the same box as the previous flagship D550, it likewise blurs the line between synth and ROMpler. For those who want a library of bread and butter, ready made sounds, there's four banks of 128 patches. Programming is similar to the D110, consisting of four tones within a structure, which offers various modulation options. The use of one tone to modulate another is familiar to older LA synthesizers and results in flexible and unique results. Free software editors are available, as are sounds. On the ROMpler side, there's 8mb of ROM expandable to 48mb. Mono sounds with portamento , legato and so forth are catered for too. Especially cool are the two DSPs, which have flexible routing options and are midi-clocked.

Like digital synths of it's era, there's a lot of parameters, a small screen, a single knob and a few buttons. Use of a software editor/librarian is a must for serious programming.
Plenty of outputs for multi-timbral work. There's GM, but not GS.

Factory presets are generally very like the Korg M1, Yamaha TG55/77 and other machines of the early 90s, late 80s, slightly clearer resolution due to cheaper chip space of the later years. However, it's more programmable than the M1, and you can use analog-style waves instead of acoustic ones and create "classic synth" patches or combine the two to give a D50-style effect. Use of LA structures gives the ability to do the latter with some accuracy. Would be nice to have "pure" LA oscillators like the D50 though. Drums aren't as well catered for as the M1, say, but expansion is possible.

This sort of instrument has been sidelined by virtual analog / physical modelling and soft synths. If you're an old school muso with an Atari though, it's the bee's knees. They go on eBay in the UK for about £150. Unlike the M1, there's no software clone. Though the GM implementation is basic (no GS/XG) the results on a typical midifile are very professional.


I'd recommend this machine for someone with an analogue-based tape (or non-PC hard disk) studio setup who needs a digital synth to cover all bases, maybe with a hardware midi sequencer- it can potentially replace a whole rack of midi gear. I bought mine as I needed a hardware GM machine. Being hardware and having multiple outs, it's great for putting through all your FX, peddles, compressors and so forth.

To sum it up, it's probably my least used synth, however if I had to get rid of all but one, this is the one I'd keep.

Roland JV-1080
3
Good Midi implementation and 8 outputs. 32 notes poly was a fairly good amount for 1986. Memory card slot on the front allows addition of extra sample waveforms for use in programming your own sounds. Small LCD makes editing difficult (and all editing must be done via this LCD unless the PG10 programmer or a computer is used).

An absolute travesty. As I mentioned earlier, the 2x16 character display is too small to allow editing parameters not to be abbreviated. Furthermore, the editing system isn't always completely logical. I've never had a manual for this module, but have nonetheless figured out how to use it all. It did take a while though - I've had it 3 years now.

When compared to todays sample based synths, it doesn't fair well. The samples are poor and make realistic renditions of their respective instruments difficult - avoid Piano's and Horns! It's Sample & Synthesis architecture does lend itself to producing some fairly bizzare sounds which is the only reason that it still sits in my rack. Funnily enough it can also muster some amazing UK Garage style orgran stabs!

A heavy steel 1U rackmount case, with small un-obtrusive buttons on the front mean that you'd have to really want to cause some damage if you were going to do it any serious harm.

Only used once in a blue moon in the studio mostly due to the fact that its difficult to edit. Theres loads of sound banks available on the internet tho - so have a check. If I needed to sell something in the studio for cash, I wouldn't be too bothered about parting with it - but like any true synth enthusiast - I don't particularly want to part with any of my gear.

Roland JV-1080
3
It's a bread n' butter module. 64 voices, 16 parts, a whole bunch of effects, 6 outs and 4 expansion card slots. I guess that covers the most important features.

I really don't like playing around in menues.. but this module actually has a pretty nice interface (i like it more than the interface on my JV-2080). It takes alot more time to do stuff on this than on the JV-2080... but since the interface is clean and easy to understand i learned it fast without a manual. There are also some nice quick tutorials on how to use it on the net. (check this for example: http://www.wsd.net.au/jvxp/educational/ )

It's metal, it's black, it looks cool! Never had any problem with either this or my 2080 (almost the same stuff..)

It got high quality samples. You can layer samples to make new sounds.. add effects.. play around. It really sounds great. The expansion boards (JV-SR-cards) adds extra samples and patches that mostly sound really nice. I almost only use the sounds as background stuff.. hardly ever any sounds from it for main melodies and stuff.. got other stuff for that. I use this module to build up some more atmosphere to my music.

Thinking of gettin' rid of my JV-modules since i don't use them so much as i really should. And for piano and drums + other stuff i really prefer using a sampler even if that means up to 10 times the work. The JV's are great workhorses.. does it work without fooling around!

The screen is far too small to edit on but you get use to it after a while. When in Multi mode I found that there is a lot of button pressing just to do very basic things like! sellect parameter button then midi parameter then channel just to sellect a midi channel even although its layed out logicaly at this level. The usability could be worse but then it could be a whole lot better but it is getting old now!

The drum kits are not all that great but when expanded with a card from which there are 19 available they are much better. I found that the sounds are clean and have a good overall dynamic range that fit well with other gear. I dont like the Reverb too much and have always prefered Yamaha effects over roland, that said they sound ok. This sound module has very nice strings and pads and a good overal set of sounds which work well together in a mix. The filters im not to happy with and the same again I much prefer Yamaha filters which sound much more analog sounding.

Its built like a tank just like a tonka toy but a toy it is not! The older gear was made better built they seemed and this module is a very good exsample.

Im still using it on all my tracks mainly drums from the techno expansion board and pads. This is a good allround synth and sits well with other gear in the rack. I dont think I would sell this other than maybe for a Yamaha CS6XR but both would be nice.

Originally posted on FutureProducers.com
Posted by: Unknown ( 6-, 2002)
Did you find this review helpful?yesno
»
Read the 24 user reviews on the Roland JV-1080 »

Roland JV-1080 manuals and other files