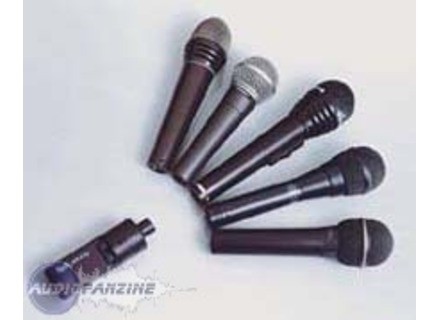 Zeck d.a.i.sy
4
I use a transmitter / receiver Zeck Daysy for 8 years. Bought used for a cheap price because it had problems. I repaired myself and since it's OK.

At first I used it mainly as a tool for micro sound with my violin connected to a small electret microphone type tie on the violin and the transmitter in my pocket.
It avoided the strings attached that I tend to forget after playing a while, with the risk of damaging the violin when I was leaving with the wire plugged in or when someone hung in the <a rel="nofollow" href="#" target="_blank"> by Text-Enhance"process</a>.
Previously I also had a huge noise when I unplug the electret microphone to free myself of the wire which connected to the console.

Also occasional use as a microphone for guitar.

Now I use it frequently, mainly micro-hand sound.

1. Good transmission quality.
The sound quality really depends on the quality of the microphone on which the branch. Shure Beta 58 on it's perfect.

2. Good safety wireless transmission.
Never at fault in my <a rel="nofollow" href="#" target="_blank"> by Text-Enhance"area</a> yet Toulon where the military and ships of various foreign countries do not hesitate to transmit on any frequency imaginable, not to mention the other CB enthusiasts and amateurs coming traffic near the concert hall.

3. The receiver has both a balanced XLR output and a jack also symmetrical. A potentiometer on the back controls the output level from the micro level to line level high enough.
Also setting the squelch (quiet) on the rear.

4. Wide variety of uses.
Since the main micro-classic, the recovery of mobile instruments on stage, to the wireless transmission distance of 200m from a central sound system to a sound device.
The transmitter is connected to an auxiliary output of main mixer via a cable a bit special (to do it yourself) that is going on inside of a speaker stand high enough . The transmitter sits on top of the foot at the end of the cable. The scope is thus greatly improved.
200 m to the receiver is directly connected to the amp the sound side.

5. Price / quality ratio very favorable if bought used.
Initially it was brand new too expensive, hence its limited distribution. But now we find it used very reasonable prices to the price of other solutions on the market.

1. I had to replace the 4 capacitors on the MKT bridge rectifier. The original capacitors are put in short-circuit one after another and were grilling the transformer or bridge rectifier. This kind of failure is extremely rare, it took me a while to believe it and fix it. The replacement of the original four capacitors has definitely solved the <a rel="nofollow" href="#" target="_blank"> by Text-Enhance"problem</a>.

2. The use of the transmitter requires a variety of sources to adjust the gain every time.
For example an SM58 microphone giving a weaker signal than a BETA58 must change the gain when switching from one to another.
Same when we <a rel="nofollow" href="#" target="_blank"> by Text-Enhance"pass</a> from one person to not very powerful voice that speaks to a certain distance from the micro to another that has a strong voice and speaking very close to the microphone. Same as when moving from a micro to a hand instrument.
As a result, the transmitter, the screwdriver <a rel="nofollow" href="#" target="_blank"> by Text-Enhance"slot</a> on the potentiometer setting plastic tends to wear out and grow. Handle with care to avoid premature wear.

3. The body of the transmitter is relatively fragile plastic. While manipulating a little too strongly, the risk of bad contacts on the connector with XLR mic and spitting nuisance. You still have to force a lot for the cause.
on the other hand, in its plastic case, falling to the ground does not scare him (much to his credit already. ... I knock on wood)
Finally a transmitter / receiver that HF ​​is doing its job with a very wide variety of uses.

I have owned several other brands and models, and the one that has best stood the test of tempset abuse.

But I think one day buy a Sennheiser makes more pro ... But it is expensive for the additional benefit that I get. So I prefer to spend my Euros to other more useful purposes.

A product Zeck what!!
Did you find this review helpful?yesno
»

Other names: d a i sy, daisy