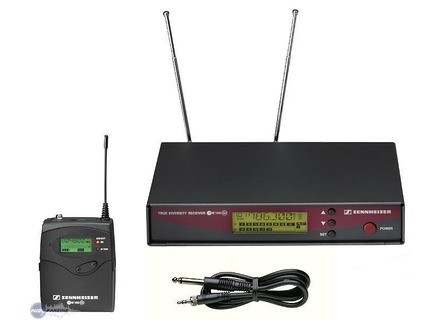 ew 172 G2, Wireless system from Sennheiser in the EW series.

All user reviews for the Sennheiser ew 172 G2

Average Score:4.8( 4.8/5 based on 6 reviews )
Value For Money : Excellent
A member has requested an additional review for this product

Sennheiser ew 172 G2
4
The Sennheiser EW172 G2 is a wireless device aimed towards guitarists. It features a half rack unit with a wireless pack like most other wireless devices on the market have. The biggest difference is that this unit actually uses AA batteries instead of the notorious 9V batteries.

The unit itself is nice and compact. It’s a half rack size, but you actually need a full rack size to utilize this. When you buy the rackmount kit (sold separately), half of the rackmount is dedicated towards racking this device, and the other half is dedicated towards the antennas. The antennas will be coming out of the front of your rack, so be sure not to break them. I almost knocked them off a few times when not paying attention.

The device sounds very transparent. Like all wireless devices, there will be some tone suckage. There’s just no getting around that. However, this device is transparent enough to where it shouldn’t matter that much in a live setting. The device is easy to program and easy to set up. Range is great, and the best part about it is that it uses AA batteries. Most wireless devices uses those more expensive 9V batteries which tend to die quickly. The longer life of this unit helps pay for itself as you’re not replacing your batteries after every single gig.

If you’re looking for a wireless today, I’d actually steer you in the direction of the revitalized X2. When I bought this unit, that wasn’t available, and this was roughly the best wireless on the market for the price. The connector that connects the body pack to the guitar is a bit cheap, so you might want to replace that, but aside from that, it’s a great wireless. See if you can find a deal on eBay or something.
Did you find this review helpful?yesno

musicman47's review (This content has been automatically translated from French)

Sennheiser ew 172 G2
5
I use it for 2 years. I bought about 460 € on Thomann After browsing on AF (I thank the aficionados for their opinion).
Very good material, no audible difference with a jack (jack used: planet waves conneteur 6m Neutrik gold plated 24k). The transmitter is very compact, I slipped into the back right pocket of my jeans (I'm right handed), the cable supplied with my bass goes without worry. To fit the strap, I did not have the same confidence, although an attempt to flip bass tempt me, I do not want to see from the case during a live ... if not with duct tape around to fix it! =)
Manual very clear, it makes the most of the beast easily (scan channels free automatic synchronization of transmitter and receiver easy volume to avoid saturation, we fear rennomer both to avoid confusion if other wireless arena.
For batteries ... want it and want it very much! I made a tour of 15 concerts (1 hour show) with the same 2 batteries (AA Duracell Plus, my faith is not high-tech!). There is a battery indicator at 3 bars as on the phones.
For scope, I'd say 50m (after a small delay there audible), but hey you make your scenes more than 50m?
I would say good value for money, but it is expensive and the quality is the cost of freedom (what a pleasure not to pay attention to his jack, which is to pass on that, etc.) . You can go listen to the record front to berate or congratulate the sound engineer, going to kiss the Groop, slammer ...
Nan frankly it's very nice and with experience I think I would do this choice, especially as prices fall =)

Dopamine Dream's review (This content has been automatically translated from French)

Sennheiser ew 172 G2
5
I use it for about 6 months, no stalls, ergonomics simple and effective.
Just spend 10 minutes in the manual to make a simple aprendre régagles sensitivity of the ISSUER and the output level and after it's good.
This is not a premium product well enough but plenty good when you want to feel free on stage without loss of sound quality.
I bought it less than 400 euros on ebay so I am Extremely satisfied with the quality / price ratio.
I could not test many other models but it seemed clear that below 500 euros should not expect too much to keep one's corect. I think it fau divide by 25 the price of HF for a token price of cable corespond, 500 euros a cable ca us at 20 euros, good enough for live performances ..
Did you find this review helpful?yesno

Sennheiser ew 172 G2
5
Use for 6 months
You plug it works, it colors the sound very little (but even between two jacks there is a small difference in sound, so ...
Value, it must be that!
Before this one, all I have tried cheaper, bulk sound to the point that I gave up buying.
A remake I bought (I also think buying one or two transmitters because I use several guitars on stage. Really good point: you can use batteries (batteries) batteries. It is really convenient and cheap!
Warning: the kit for rack mounting costs arm and a leg! Just as the sennheiser batteries!

Sennheiser ew 172 G2
5
Excellent! nothing wrong (except the price)
It is strong because the director has fallen several times and worry ^ ^
Say anything it's pro gear!
You turn and walk it's true!
A lil gem!
Did you find this review helpful?yesno

kenny serane's review (This content has been automatically translated from French)

It's 100 Series second generation (G2), extremely little difference with the 300 series (except the accessories for rack mounting).
The transmitter is very compact, easy to use. With its illuminated display was the possibility to make adjustments in all circumstances. However, the power button is arranged under the disc, pens not to be supported by mistake, gets a little hard about how to turn off the transmitter often when not in use.
For frequencies, it's perfect, I do not even need to change it since. (Is lit and it works). The UHF help, I had no signal dropouts.
Autonomy is really excellent, with 2 AA batteries (new in Round G2), he buries his predesesseur far.

In short I use the EW 172 G2 for my electric guitar and I am very satisfied. One of the best system
Did you find this review helpful?yesno
Cookies help us improve performance, enhance user experience and deliver our services. By using our services, you agree to our use of cookies. Find out more.