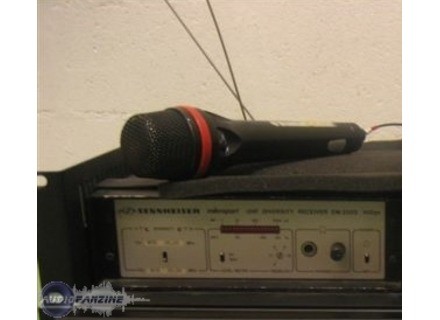 Sennheiser skm 4031
5
I have long been used. I had a choice between the HF medium range or occasion. I had the chance to recover, and since I can not part with it.
I use them in conjunction with Beyer S 186 U.S. and I eventually dropped many wireless microphones or not I had with "famous" SM58 that I no longer much to the chagrin of some singers ...

Extremely reliable, they have one big advantage: their lightness and grip. Not to mention the sound, the electrostatic cell as we did more.

Many say that HF ​​is the best that has ever been done, much higher than the SKM 5000, which replaced it. I have not had the opportunity to try the 5000, but why not.

However, when I put the same Beyer S 185, the other star of TV shows for years 80/90, front. Indeed, despite its quality, the SKM 4031 is guilty of noise modulation absent on Beyer, who is growing a bit over time, especially with weak batteries. Beyer and his famous head band!

But the quality of receivers, antennas kits etc, is still a micro inevitable that many pros are separated rather quickly, often with regret!

FYI, last used during a concert, 5 SKM 4031 and 5 Beyer S 186 VHF carefree all the great astonishment of the singers in front of these "old" pickups, but soon amazed at the perfs still valid.

However, I dropped the SKM 4031-0 HF (band 8 meters in 37 MHz) too sensitive to interference and long antennae, and the SKM 4031-UHF TV with TNT begins to create their many worries ... snif!