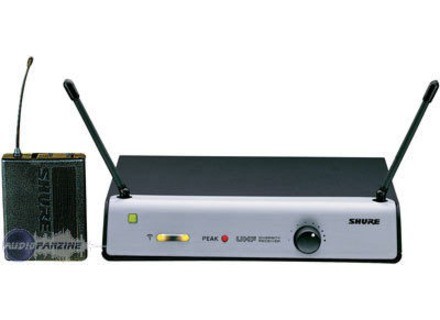 twani's review (This content has been automatically translated from French)

Shure The Guitarist UHF
1
I have this HF Kit for a few months and I do not use it. In fact, the sound is not transcribed in good quality: the super clean clean crunch becomes a little yucky ... I have not tried other wireless kits before but in any case it is the pourave I think. For this price (300 euro) it is hoped much better !!! because it is unusable. If I had the choice again, I would buy the above steps, and I would save to afford a more expensive HF kit, but worthy of the name. But I "1" because it is a shure and there is even a quan ki sor ....
Did you find this review helpful?yesno
»

Hellraisers's review (This content has been automatically translated from French)

Shure The Guitarist UHF
5
I have two years already and it's true that not all top of the system ... hf There is a slight hiss, but if you do not hear you play. The sound is also slightly altered but readjusted on the amp it can very well compensate for this problem. What is not catastrophic. After it's true that it is a system designed for hf scratch that will play in small rooms with their group, not to bercy course ... But I think to use "gigs" is fully satisfactory (that has not already had his foot wrapped around the jack singer ????)...

with respect to the clear sound that becomes a crunch, I have not had that trouble ...

Unless you have the gold coins and invest in a u-Nady 1000gt for the top, I think this one is really the case.

See all 8 photos of Shure The Guitarist UHF »

Other names: the guitarist uhf, theguitaristuhf