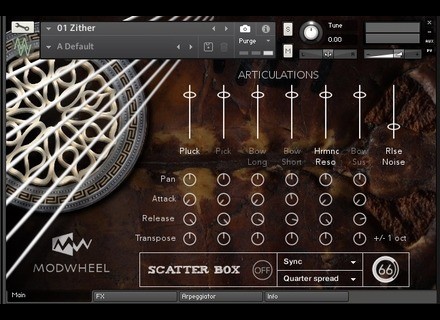 4 African Lute (a six string lute, with a metal sound board).

6 Can Bau (MODWHEEL's take on a Vietnamese Dan Bau).

There are also four additional patches of percussive and extended effects.

Each instrument has been plucked, picked, bowed, struck, rattled and extended in whatever ways the MODWHEEL team could come up with, giving each instrument up to six articulations.

Each articulation has access to pan, envelope and transpose (up or down one octave) controls. This allows for layering and combining the different sounds giving huge tonal possibilities. When not in use, articulations can be switched off to conserve CPU usage.

Scatter Box contains four sections of handcrafted IRs, (Sync'd non sync, reversed and atmospheric) The IRs have been specially created to compliment the A Psaltered Zither. The sync'd section allows for very characterful delay type effects, that will sync to the tempo of your DAW. The atmos section features longer events and some tonal elements that work well with pads and longer atmospheric articulations. The non sync and reversed sections give even more access to sound manipulating possibilities.

Each patch features access to a full range of effects, via the FX tab.

The patches also feature tabs that take you through to the arpeggiator controls as well as an info section, where each patches functionality is explained.

View all 6 videos of Modwheel A Psalrered Zither »

Other categories in CDs & Sound Banks by Style