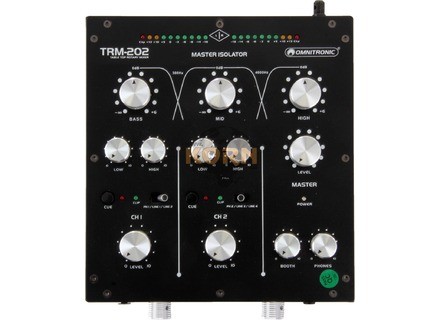 toukiff's review (This content has been automatically translated from French)

Omnitronic trm-202
4
Rack but not because of the size ....
For detailed specifications is already ....

Simple congiguration, positioning and adjustment of gain is by the side screws and pre-set max.
The blue power LED, hurts the eyes I think I put a tape over, really strong as LED ....

The sound is clear without the curves of the old, damage tables. Keep in mind the price of this little beast to mitigate information data.
The sound is clean, a bit flat for my taste but accurate.
It has good fishing, even sacred, I tested quickly by that morning received, but she seems to have the reserve ...
The equalizer is good for the mix, neither too much nor too little after get used.
The buttons are resistant to the mix, nice to ride smoothly.
They are metal and notched, I found not very nice to the fingers but hold very well.
The filter cut well, I was a vestax dfg x1, but I find that the best omnitronic is enough to have fun with the frequencies.

For just one day, I mixed a lot of the old table ecler SCLAT with good analog sound and vestax pmc 50 also equipped with a good analog sound ... It is clear that price buy omnitronic I did not expect the same sound quality, but it is good for the price.
Still too early to say what pleases me more or less, we buy this kind of table knowingly.
For 350euros, I do not regret it, I spend about two hours on it, and it's nice to mix the old. I think this is enough, now if you can afford a take a djr but 1800euros So you're saying that for 1400 euros less, you will not have the same experience this is normal ...
I repost an opinion, and I'll try posted a video, using all the knobs so you can get an idea. Especially for insulators
Attention to the power plug pins on the table can be folded if you force, observe well the sense of direction of the connection ....