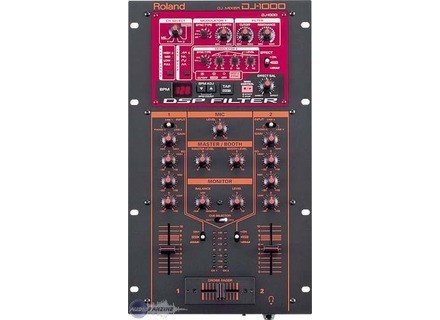 Roland DJ 1000
3
Purchased it used from a friend 2 years ago, because I wanted to move from using a 19" multi-channel DJ mixer to a hiphop battle-style 2 channel mixer. Paid $450 for it in like new condition with a spare crossfader.

The Roland DJ-1000 has the same sound quality and fader "feel" of the famous Pioneer series of mixers. Extremely smooth faders, powerful EQ knobs, and a simple headphone cueing system make this an easy-to-use as well as dynamic mixer. It also comes with a DSP effects processor that is modelled after an analog synth, with 2 separate modulator blocks. It is also the only mixer ever made (other than the Roland DJ-2000) with a MIDI ouput.

The DSP processor sounds like nothing you've ever heard before in a DJ mixer! Totally unique and very wild, rivalled in my opinion only by the Electrix series of effects units. However, it takes a gentle hand and a lot of practice to use the DSP effectively - it's easy to go too far and mangle the sound.

Like a Pioneer mixer, the faders on the Roland are relatively fragile. Techno, House, and Trance DJ's will probably never have any issues, but turntablists will find that the faders fall apart after only 6 months or so of rigorous use/abuse. Once, one of the volume faders literally ripped out in my hand during a show! Of course, I was definately beating the heck out of them, but this would never happen with a Rane or Vestax battle mixer.

Also, the crossfader has no curve adjust. Instead, you have to buy an all new crossfader if you want to use a short-throw hiphop style scratch fader. To add insult to injury, the scratch fader began popping and crackling after only a week!

Other than the fader issues mentioned above, this unit is built extremely well. Its single MIC input is 1/4", has a large ground jack on the back, and has an internal power convertor so there's no wall-wart to lose. Its flouro-orange and black color scheme is easy to read, and after 2 years of use showed almost no dings or scratches. The mixer itself is sealed beneath the faceplate, so it survived having beer, soda, and sweat dripped on it many times.

The sound quality of this mixer is really impressive. Roland's technical expertise shows here, blowing away mainstays like Numark, Gemini, or even Vestax! This alone makes it worth its current price tag.

When this mixer debuted 3 years ago, its $800 price tag and untested design made it a risky investment, despite carrying the Roland name. Now these mixers are still available new for $350 online, and at that price they are definately worth it.

It is a great choice for DJ's who are relatively gentle with their mixing, and who crave Pioneer sound & feel without the Pioneer pricetag. The DSP unit is decent as far as FX go, but I think it would really shine as a MIDI controller for Grooveboxes or Synths... something NO OTHER mixer can do.

One word of caution would be that even though it looks like a hiphop battle mixer, IT IS NOT. The Roland DJ-1000 cannot stand up to the abuse of turntablism / scratch mixing and is not a good choice for those applications.

reddevil75017's review (This content has been automatically translated from French)

Roland DJ 1000
5
As indicated in table 2 mix tracks, box integrated effect and all the trimmings

the general configuration is simple and the manual is clear enough for what is after effects this will take a little head but the heavy CEST is less accesible than other competitor has this level, but just at that level huh lol

The console is transparent not breath the equalizer is monstrous by my .... it's very very heavy mix this table sends severe and will deserve more ac nothing to do reconaissance of the Pioneer level quailté anyway pioneer is not a reference to what is real tables Taté know. ...

I use encoe defois if I buy 4 years secondhand for a pittance I try any kind of table xone rodec piopio Freevox and I pass by this table for my strength level and sound quality equal to the level rodec .... value for money considering the price I pay 50 lai eros ds impeccable condition CEST happy lol
Did you find this review helpful?yesno
»

swayzak's review (This content has been automatically translated from French)

Roland DJ 1000
5
The Roland DJ 1000 mixer is a two-way. Each line contains two inputs and one mic input. Qualizers paramtriques of good quality and gain a more than adequate complte all. There are two outputs to a speaker for and one for recording, for example. Possibility to connect midi instruments. to play live with your turntables. Effects Intgr type Freq Range, LFO Wave Modulator Filter ....

This table is perfect for electronic music in the mix

Manual in French trs clear. Nothing complicated in this table.

I used it often mix two decks with a rhythm box. Meaningless sound perfectly silent sent my amp and my speakers. Perfect

I have 6 years now and there has never been a problem on the other knobs. Compared to the price of the era, it CHRE silent but for the quality it's worth.

It MRIT greater recognition in the community. I would do without this choice hsiter.

jerometaurines's review (This content has been automatically translated from French)

Trs enjoyable use.
The low rglages mdium are acute and gain enough space to cut a frquence without touching other buttons
The possibility of power rgler the volume of the cost of the pr headphone compared to the gnral is really great practice (I do not know if it is clear but in any case it is a function found too infrequently)
DSP box is not easy trs. I prfr pr paramtrs effects as does Pioneer.
The cross fader is clearly and absolutely not orient mix hip hop.

The sound is neutral and excellent.
The cuts are frquence standards! When you cut the bass there is really nothing!

I've had 9 years!! Nothing has changed but I do not use the house's (the cross fader is original!)
I love the headphone rglage volume between the cost and its pr gnral.
I love the cut and frquences EHJV gnral sound.
The box has no effect is not me.
In the silent era it trs CHRE but ultimately the price is largment justification.
The design that I found the trs era fade at least MRIT crossing time, now I do not think my table is dmode.
Did you find this review helpful?yesno
»