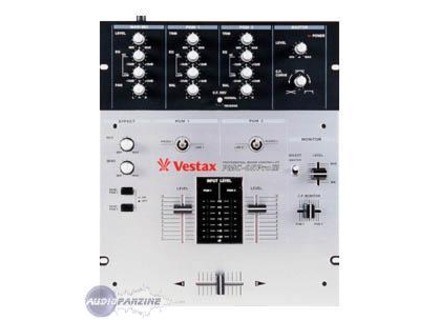 Vestax PMC-05 Pro III
5
I've given this a 7/10 for features because the mixer doesn't have many. But if you take into account that it's a scratch mixer (i.e. a mixer that doesn't need many features to suit the DJ), it really deserves a 9 or 10. Here's what I like about the features... 1. The crossfader (PCV) - Sharp cut-in time - Nice, substantial feel - It has that classic click sound, so you'll actually hear your clicks when you're trying to bust out your thousand-click flares - Adjustable rotary curve, so you can change from sharp cut-in for scratching to a long fade for mixing - Reverse/hamster switch - Tested at 2,000,000 cycles. Magnetic crossfaders (like on the Rane TTM56) apparently go to 15,000,000 and Penny & Giles (like on the Stanton SA-5) to 4,000,000 or something similar; however many million the company quotes, no fader is indestructible, and the reality is that you shouldn't have to worry about it - all of these mixers have longlasting crossfaders that won't bleed or break in a hurry. If you're a scratch-head, you'll probably have to get used to replacing a fader once every year or two. 2. The upfaders The same high quality as the crossfader. These are the same PCV faders that are built to last and respond, but you can't change the upfaders to reverse or alter the cut-in time with the flick of a switch. It is possible to do it, but you have to get inside the mixer. For me, I haven't bothered to change the cut-in time on the upfaders because I'm fine with the standard curve. 3. Effects send/return system This is a system that you'll see on the left side of the mixer that enables you to plug in an external FX box and... affect. Most scratch DJs aren't very concerned with effects, so this is a basic system (no wet/dry control) but it will work properly. If you're hung up about effects, you're probably not a hip-hop DJ or you should check out the Rane TTM56 for its Flex FX system. 4. Master/cue select Nice little touch that allows you to choose between monitoring the sound that's coming out of the speakers (master) and the sound selected according to where your crossfader monitor pan is (cue). 5. Overall look and feel This has to be the sexiest scratch mixer out there - it's just the classic look. Some people say that looks don't matter: those people have ugly mixers. Personally, I enjoy using a beautiful mixer everyday. Also, the mixer feels great - extremely solid and tactile. This fits in nicely with my vinyl habit - one of the main reasons I enjoy playing vinyl so much is because of the sexiness and tactility of it, so it's nice to have a mixer that compliments that. What it lacks... 1. A third band of EQ (this mixer allows you to adjust the treble and bass, but there's no midrange), which isn't really an issue for me as a hip-hop DJ, but might be if you're into EQ mixing or kills. 2. Upfader contour selection and reverse. Again, not an issue for me personally, but this is the second thing that a lot of other scratch mixers have that the 05 lacks.

Lay-out is crucial on scratch mixers. Basically you want to be able to move the crossfader freely and you don't want to be bumping against lots of cluttered switches that you probably won't use. The 05 delivers. The only criticism I have about the interface is that the rotary knobs are a little close, which can be annoying if you like to grab the rotaries really quickly and do your big, dramatic twists.

Vestax makes a well-built product. But no mixer is indestructible, so customer service is another important consideration and so far I've had only good experiences with Vestax. The fact that this mixer is or has been the choice of DJs like Qbert, Mixmaster Mike, Cut Chemist, Shortkut, Yogafrog, and D-Styles is a good testament to the quality of this mixer. Hey, the 05 was even used by Qbert at the final performance of the Invisble Skratch Piklz - there's a compliment. The PMC 05 has basically been the pioneer model of scratch mixers. It doesn't have all the features that some other models do, but it has a solid reputation in the hip-hop community as a classic mixer.

I'm not a sound expert, but I've got absolutely no problems with the sound on this mixer. It sounds warm and real to me, that's all I really ask. From what I hear from people who actually know what they're talking about when it comes to sound, this mixer does the job. I've got no doubt that there are battle mixers with better sound, but I'm a hip-hop DJ - I'm nerdy about my music, not about my sound. This mixer is used on big, booming soundsystems across the globe without any issues, and it sounds great to me (curse the day that I ever feel the need to get a fat, 10-band EQ club mixer).

I love this mixer a lot. When I change mixers in the future, it'll probably be to another Vestax even though I was initially aspiring to a Rane TTM56. You can definitely spend more money and get extra features, but if you're a hip-hop DJ, the bells and whistles that some mixers offer are basically irrelevant. But yeah, this mixer definitely does it for me. I just like having a mixer that I know will serve me well and will feel good to use. The third EQ band is the only thing that this lacks for me, but even then I don't really mess with the EQs anyway. Further down the track I might want a mixer with a wider EQ range or better FX capabilities, but for the forseeable future I'm going to love scratching and rocking parties on the 05.

Vestax PMC-05 Pro III
5
I like the features. It is very user friendly. The faders, switches and knobs are well laid out. Perfect for first timers.

Maximum quality for the price. Faders, knobs, and switches are solid.

The sound quality is excellent! A lot of 'bang for your buck'.

I love this product. It was well worth what I paid.

Originally posted on FutureProducers.com
Posted by: mrinfotek (January 2-, 2005)
Did you find this review helpful?yesno
»

djnordin's review (This content has been automatically translated from French)

Frankly this table dumpling her and there is nothing to say it's the best! dj nordin
Did you find this review helpful?yesno
»

Alexone's review (This content has been automatically translated from French)

- Is Gnrale setup simple?
very simple
- The usual functions are they easily accessible?
- Is the manual is clear and sufficient? ...?

Good nivo qualiter price table, it is a very sturdy table
Did you find this review helpful?yesno
»
Read the 7 user reviews on the Vestax PMC-05 Pro III »