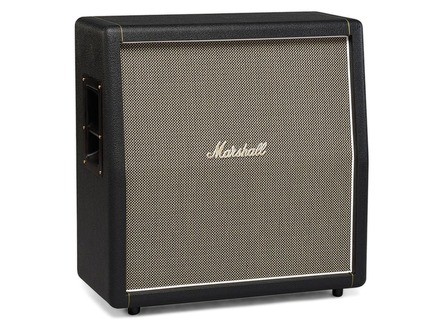 2061CX, 2x12 Guitar Cabinet from Marshall in the Handwired series.

Marshall 2061CX
5
I’ve used this cab for a music that is very demanding for the gear that you use, as it’s full of dynamics with a succession of hardcore-like portions and atom-style moments that often feature delays, reverbs and overdrives/fuzz/distortions (in a nutshell

.
I use it along with a Marshall 2061X head and a Marshall 1936 loaded with Greenback speakers.
So I have a full stack with a real sound – and it’s quite transportable !!!
With the 2061 head, this is tha cab that sounds best after trying several other models – Mesa and Orange with V30s, Hiwatt with Fane or 1936 with Greenbacks).
The 1936 sounds a bit boxy, the Mesa and Orange too shrilly, and the Hiwatt sounds nice but a bit too straight to my taste – but still very good.
The 2061CX is full of dynamics with a better sound diffusion than all the other models (except the Hiwatt), the volume drops less when you get away from the center.
The G12H30 are very balanced speakers for rock, even if the curve is theorically close to that of V30s. I find their mids to be fuller and more dynamic in the 200-to-1000Hz area, and their frequencies less axaggerated between 2 and 4 kHz.
All in all, you get a good compromise between a slightly dirty 60s/70s sound and the straightest modern sounds – you get details without losing the mojo

On a side note, it looks great and well-built.
I recommend it, but just like with any gear in that price range I also recommend trying it beforehand