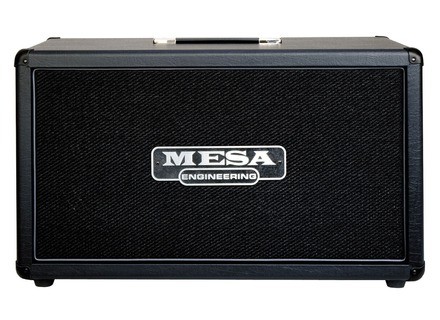 Mesa Boogie Recto 2x12 Horizontal
5
There really isn't anything bad to say about the Rectifier 2x12 cabs. They are as good, if not better, than any 2x12 out there. The sound, the quality, it's all there.

I purchased mine used for around $300, so I got a great deal. I believe they go for around $700 new. I don't think any cab is worth the new price since you can usually get them at half price used.

Soundwise, they are excellent. They do almost sound like a 4x12 cab. Killer low end, and great punch. They won't project as well as a 4x12 and they are very close to he ground, but that's how I like my cabs anyway. For rock and metal, they are perfect. If are looking for a more 'open' sound, then I'm not sure this would be the cab for you. They are very very tight and punchy. Mine is loaded with Celestion Vintage 30's.

As far as quality, Mesa is second to none. They may even be a it overbuilt. You could drop this thing out of a car on the highway, and it would be fine. Just awesome! I love the leather corners on their cabs. Sort of like the caddie of guitar cabs.

Overall, I am very happy with my purchase. I will never sell mine.
Did you find this review helpful?yesno
»

Mesa Boogie Recto 2x12 Horizontal
5
The Mesa Boogie Rectifier 2x12 cabinet comes in at about $650 new, which is high priced for a new 2x12 cabinet, but you are paying for a high quality and just GREAT sounding cabinet by all means. Compared to the Marshall 1936, it's a heavier cabinet weight wise and tone wise. It is loaded with casters for wheeling it around (a handy feature for saving arm muscle) as well as two side handles for carrying it. It weighs a fair bit for a 2x12 (I believe it's about 55 or 60 pounds) which to me feels a good 10 pounds heavier than the Marshall 2x12s).

Tone wise, I'm really impressed with this cabinet. Around here we don't have a whole lot of options for different cabinets to try. Makes like Port City and Whitebox aren't easily available here, so players are primarily dealing with Marshall and Mesa. This cabinet is loaded with two Celestion Vintage 30 speakers putting out 120w of power. The Vintage 30s are fast becoming some of my favourite speakers for their smooth midrange, their reasonable low end and their very biting and rich high end and when they're placed in this high quality Mesa cabinet it just sounds stellar. Even when I've tried them as new, barely broken in cabinets they've always sounded warm and very pleasing to my ears. It's a very BIG sounding 2x12 and fills up rooms no problem... which is a primary issue I've found with lighter weight cabinets that I've tried over the years. As much as a pain as it might be sometimes to lug a heavier 2x12 around, it's worth it for the thickness that you gain in tone as well as the sound it disperses around the room.

All in all I definitely think that of the options we have around here for new speaker cabinets, the Mesa Rectifier 2x12 cabinet is probably the best thing you'll find. For about $650 new I'd probably consider spending a little more and getting a Port City Wave 2x12, but barring that, the Mesa Recto is probably my favourite cabinet available today.
Did you find this review helpful?yesno
»

Mesa Boogie Recto 2x12 Horizontal
4
The Mesa Boogie Horizontal Rectifier 212 cab is an extremely portable and well built 212 cabinet. There isn't much for features here, as it doesn't have stereo output capability, or a removable rear panel.(back can be removed to service/change speakers, but is not meant to be played this way) It is meant for one sound; punchy and cutting rock tones.

That sound is created by two English-made celestion Vintage 30 speakers and Mesa's tough as nails marine grade baltic birch cab construction. It should be noted that Mesa Boogie uses special Vintage 30s that are voiced a bit differently than what you find in most other companies' cabs. Mesa's are a bit smoother and more pleasing to the ear, yet they still retain the signature "mid-spike" that V30s are famous for.

These speakers can sound a little harsh and almost fuzzy, depending on the amp being used and can especially sound this way when being played without a band, such as at home for practice. In a band setting however, they cut through the mix wonderfully and sit in the mix just as they should.

The cab is built incredibly well, as all of Mesa's products are. Solid as a rock and they look great too. Their low profile and black, stealthy design are quite appealing. The Black piping on black grill is a nice touch as well.

Now for the negatives:

First of all, the cab is equipped with only a small rubber handle on the top to carry it by. It's the same small handle that you'd find on the top of an amp; not exactly practical for carrying a guitar cabinet around, or for loading it into a vehicle! I would be much happier if it had recessed metal handles on the both sides of the cab, but maybe this would interfere with the tone, not sure though.

The dimensions of this cab make it sound VERY directional. (it measures 17 1/2" high, 30 1/8" wide, and 14 1/4" deep) While standing directly above the cab and slightly to either side, it sounds heavenly, especially with my Dual Rectifier! It's full, punchy, crunchy and has just the right amount of presence and a nice woody bottom end. Take a few steps back though, and the low end starts to fall short, yet the high mids and highs become more present. Stand across the room/stage and it's all piercing highs with no low end. The V30s and the rear-loaded design of the cab are to blame for this directional sound projection.

I compared this cab side by side to the Mesa Traditional (Stiletto) 412, which also has V30s and the 412 was MUCH better in every way. It was just as punchy, but sounded tighter, more responsive, clearer, and it didn't get boomy, thin or harsh no matter where I was standing. Best cab I've ever played! The Rectifier 412 was also nice, but was a little too boomy in the low end and scooped in the mids.

Overall, I'd say that the Mesa 212 is extremely well built, and sounds pretty darn good for the right application. For recording it is great, and it sounds great if you're not standing really far away from it, but I wouldn't recommend it as your only cabinet. It does however compliment a 412 very well. I stack a Carvin 412 on top of mine, and the Mesa 212 on the bottom adds a nice punchy low end and some nice cut because of the V30s.
If you are looking for a 212 to use as your only cab, I prefer the Bogner OS212 or the Orange PCB212. They both sounded fuller and not as directional. But the Mesa is no slouch and has top notch build quality. Go for it if your main gig is recording, but look elsewhere for a well rounded gigging cab.

Mesa Boogie Recto 2x12 Horizontal
5
Absolutely love this cab! Mesa builds things to withstand abuse and road readiness. This cabinet is no exception. Built with high quality birth wood and solid tolex it can rip but most Recto cab in my experience held its own.

This was typically used in conjunction with a Recto 4x12 with the same speakers. This 2x12 comes with Mesa's Celestion V30's which is a bit different than the V30's you buy elsewhere. They seem to be still made in the UK where the new V30's are Chinese made. I'm not sure if Mesa still uses these or not, my experience is with older 2x12 cabs. I believe that the Mesa version V30's has more warmth and a smooth character to them to which the China made ones come off a little more sterile. They aren't bad speakers but just compared to the Mesa style I feel they don't handle business.

The layout of the specs as follows...
* 120 Watt
* V30 Speakers
* Closed Back
* 8 Ohm
We coupled this with a Dual Recto and another 4x12 and there isn't much else to say other than it just rips. I have played many 2x12 cabs and there are some great one out there. I think Mesa's pricing on it may be on the higher end. They usually run around $600+ which you can find some cheaper on the used market of course.

I used a Les Paul with the Recto and 2x12/4x12 set up and it was a combo made for rock. I think there is a sweetness by adding a 2x12 to a 4x12 and a convenience as well instead of hauling around two 4x12's. I feel I was able to get a huge sound with out breaking my back hauling multiple 4x12s around to gigs.

This cabinet is a closed design in that the back side is not open. So this makes the speakers very directional. So if you are using only the 2x12 then you may not be able to hear it as well while on stage. But if you're using it as an iso cab in another room then it is perfect for the space. I like this cab also in a wet dry set up as well. Where I could run my dry signal out to the 4x12 and running my effected signal to the 2x12. This was probably my favorite setup. I simply use a QSC power amp with a TC Electronics G major out from my load box. It was simple but I always had to talk to sound guy into giving the guitar player two mics. So be prepared to haggle with the washed up musician running sound who is pissed that he isn't playing anymore.

I do have some gripes about this cab. The stupid handle on top is sort of ridiculous! This cab isn't light and its not a back breaker either. But putting an amp head handle on top of a 2x12 that weighs over 60 lbs is just dumb. It can easily slip out of your hand since you only have one hand to hold it with. I think this is just poor research and design on Mesa's part.

One thing that I forgot to mention is the sturdiness of Mesa's removable casters on the bottom. Mesa makes the best casters in my opinion. They are sturdy and reliable and make transporting the heavy duty cabs much more forgiving. Plus the option of being able to remove them so you can throw it on top of a 4x12 is fantastic!

I would recommend this cab to any one who is need of a solid 2x12 that will not give you much problems. Even switch out the speakers if V30's aren't your thing. The cab is solid and road worthy. It is a bit of a plunge at $620 but it will last you a lifetime of gigging.
Did you find this review helpful?yesno
»
Read the 17 user reviews on the Mesa Boogie Recto 2x12 Horizontal »