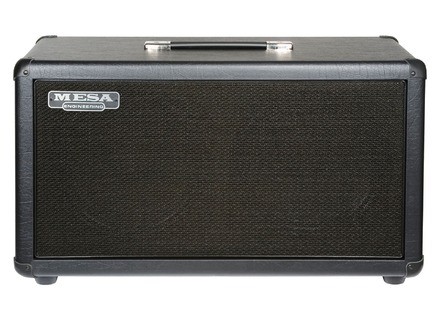 Mesa Boogie Roadster 2x12
5
Absolutely love this cab! Mesa builds things to withstand abuse and road readiness. This cabinet is no exception. Built with high quality birth wood and solid tolex it can rip but most Recto cab in my experience held its own.

This was typically used in conjunction with a Roadster 4x12 with the same speakers. This 2x12 comes with Mesa's Celestion V30's which is a bit different than the V30's you buy elsewhere. They seem to be still made in the UK where the new V30's are Chinese made. I'm not sure if Mesa still uses these or not, my experience is with older 2x12 cabs. I believe that the Mesa version V30's has more warmth and a smooth character to them to which the China made ones come off a little more sterile. They aren't bad speakers but just compared to the Mesa style I feel they don't handle business.

We coupled this with a Roadster and another 4x12 and there isn't much else to say other than it just rips. I have played many 2x12 cabs and there are some great one out there. I think Mesa's pricing on it may be on the higher end. They usually run around $550+ which you can find some cheaper on the used market of course.

I used a Anderson drop top with the Roadster and 2x12/4x12 set up and it was a combo made for rock. I think there is a sweetness by adding a 2x12 to a 4x12 and a convenience as well instead of hauling around two 4x12's. I feel I was able to get a huge sound with out breaking my back hauling multiple 4x12s around to gigs.

This cabinet is a closed design in that the back side is not open. So this makes the speakers very directional. So if you are using only the 2x12 then you may not be able to hear it as well while on stage. But if you're using it as an iso cab in another room then it is perfect for the space. I like this cab also in a wet dry set up as well. Where I could run my dry signal out to the 4x12 and running my effected signal to the 2x12. This was probably my favorite setup. I simply use a QSC power amp with a TC Electronics G major out from my load box. It was simple but I always had to talk to sound guy into giving the guitar player two mics. So be prepared to haggle with the washed up musician running sound who is pissed that he isn't playing anymore.

I do have some gripes about this cab. The stupid handle on top is sort of ridiculous! This cab isn't light and its not a back breaker either. But putting an amp head handle on top of a 2x12 that weighs over 60 lbs is just dumb. It can easily slip out of your hand since you only have one hand to hold it with. I think this is just poor research and design on Mesa's part.

One thing that I forgot to mention is the sturdiness of Mesa's removable casters on the bottom. Mesa makes the best casters in my opinion. They are sturdy and reliable and make transporting the heavy duty cabs much more forgiving. Plus the option of being able to remove them so you can throw it on top of a 4x12 is fantastic!

You can pick these 2x12 cabs up at a good price for new ones at around $590. Not a bad price for a solid built sturdy cabinet.

Mesa Boogie Roadster 2x12
4
I used it for 9 months, I had tried before ENGLs.

Good bass response even if it is not a 4x12, very precise (ie mesa XD) and of course hollow in the mids for a more modern sound (unless you play the big thick rock with American, there scratching your will compensate).

What I like the most accuracy.
What I like least, the basic compression on the signal somewhat reducing the violence of the guitar.

The price / quality ratio is good because this stuff holds up, very durable and reliable !!

With experience (I play the black and death metal), I would direct to marshall for cabs to sound American but typical, modern metal or big bold blues, it's great!

mister_vai's review (This content has been automatically translated from French)" A great value!"

Mesa Boogie Roadster 2x12
5
Used 1 year, I changed it to a vertical NOS but for horizontal baffle I know no better, but I have not tried everything either!

I love the massive sound without ever being messy, very effective metal as the clear. The leather style coat is the best effect.

I recommend buying a OCCAZ to avoid the blow of typical bar Mesa after the quality is there, no worries.